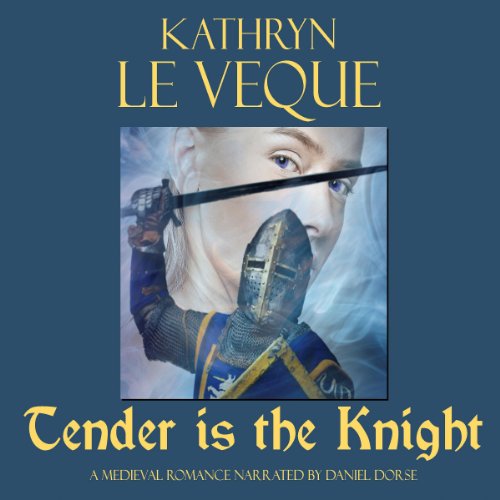 Tender is the Knight

Tender is the Knight

1228 A.D. - After a vicious battle with old adversaries that sees his father killed, Sir Dennis d’Vant finds himself the head of the House of d’Vant. A house descended from the kings of Cornwall, they are a proud but warring people. Their most hated enemy is their neighbor to the north, the rich and cunning Earl of Cornwall. Dennis, however, is not like his forefathers; a giant of a man and a skilled warrior, he is also quiet and gentle. He does not possess the same fiery instincts of his family and for that, he is often looked upon as weak.

But Dennis is anything but weak; he is brilliant and introspective. Dennis is trustworthy; the earl is not. Little does Dennis realize that his offer to marry a woman of the earl’s choosing will change his life more drastically than he could ever imagine, and put the House of d’Vant in danger of being wiped from the face of the earth.

The Lady Ryan de Bretagne is the daughter of the earl’s captain. Having no daughters himself, the earl chooses Ryan to marry into the hated House of d’Vant. Ryan is a feisty, head-strong woman and wants no part of the marriage, but is forced to wed the giant knight with the mysterious gray eyes. When he takes her back to St. Austell Castle, she is introduced to a shocking new world of women who dress and fight as knights, of filthy keeps and filthy men, and of a people who want to hate her simply because she is related to the Earl of Cornwall. As Ryan struggles to become acclimated to her strange and frightening new world, the Earl of Cornwall works in secret to destroy the treaty he has agreed to fulfill, thereby eliminating the House of d’Vant once and for all so he can confiscate their lands. At the heart of all of the earl’s animosity is a terrible secret that binds Cornwall to the House of d’Vant, something so awful that it cannot be spoken of. But those who know the secret know how very shameful it is to both sides.

I could not wait for this audio to be over...I have never felt that about a Katherine LeVeque book. She is definitely one of my top five authors. This narrator was awful and ruined the entire listen for me. Terrible female voices...whiny men's voices...terrible whispering narration and just bad experience. Please Katherine..I don't mean to be unkind to this man, however, please don't use him for your wonderful books again... I'm sorry, however, that was almost painful to listen to. Love you KL...keep those wonderful books coming!!

7 of 7 people found this review helpful

This story is great but the narrator is terrible. He totally changes the meaning and tone of the story with his awkward and boring narration.

Disappointment all around. The narrator has a lovely voice but I had to set speed at 1.5 because he read SOOOOO slowly.
The heroine was pathetically stupid.

It is funny to that multiple reviews list the narrator as the reason they didn't like the book. While he isn't my favorite of her narrators, I don't think any of them could have made this heroine likeable to me.

During the times when men had to leave to fight, you give us a spoiled, weak heroine who is so selfish she can't bear to be alone. She has to put herself in danger so her husband has to save her rather than concentrate on what is important.

After getting in trouble multiple times when she didn't listen, she has to be defiant one more time and get herself kidnapped. Strength isn't doing what you want without regard to consequences, this is not a strong heroine. She is a whiny, weak, spoiled princess who throws tantrums when she doesn't get her way. In real life I would bet money she would have died an early death.

I listened to The Red Fury first and loved it. I then found the first book of the series and was excited to listen to it. I couldn’t get through the first chapter because the narrator was so bad. I am very disappointed, but am unable to tolerate the voice. The narrator shows no inflection in his voice.

A knight so tender and true like no other

The hope of peace came with the death of Dennis’s father. He proposed marriage to a woman from Cornwall to breach the rift long-standing between the clans, beginning a healing process.

His vision, far beyond his father’s, his knights’ and sister’s, was the only solution he thought might work to stop the bloodshed and endless repair to his beloved castle, where his family and knights wanted only revenge for the death of all the knights in the last skirmish and the death of his father. He was now Earl, responsible for the House of d’Vant. He was a great warrior, a man not understood and found himself at odds with his family, and knights of the castle. Even his sister Charlotte, better known as Charles, since she was a knight of the castle, didn’t care to bring anyone from the Earl of Cornwall’s castle into their midst.

Charlotte made Lady Ryan very uncomfortable in her new position, wed to Sir Dennis. Sir Dennis could not believe his good luck when he took Ryan as his wife. He was willing to marry a hag, and somewhat expected they’d offer him one, not this beautiful creature, Ryan. Sir Dennis was won over quickly by the intelligence, wit and kindness of Ryan. Not so his sister.

This is a story about how far man will go for greed. For there are some very greedy men who are a danger to both Lady Ryan and Sir Dennis. It was resplendently written as with each of the novels Kathryn Le Veque writes. She has a brilliant approach to the telling, gripping the reader by her shoulders—exciting, tragic, weep-worthy, suspenseful, passionate, humorous, and sweet, all woven together.

I ask myself, what makes a good story. They all have the same ingredients as does a cake: Flour, sugar, oil/shortening, milk, salt and other spices. In a story it matters when each of the ingredients are added, how much of each is present, where and how long it is baked. When it is done right the cake is a masterpiece. The same holds true for a good tale. Author Kathryn Le Veque knows just how to combine the ingredients, what and how to include to set a reader to only want more of what she writes.

Daniel Dorse uses a very low, warm voice for the general narrator, quite subdued and lulls the unsuspecting reader when he breaks into dialog. He’s delightful in his portrayal of various characters. His voices for the Spaniards speaking English are excellent. The emotions of the character were very convincing only reconfirming to me how much fun it is to listen to audio with a narrator who knows what he’s about. The way he tells the story is quite mysterious and compelling. I chuckled when I heard Charlotte’s voice. Charlotte, first born and sister to Dennis, learned to be more man than woman, ever as much a knight as other men. Her father was disappointed having the first-born female, but decided to train her as male and warrior. I enjoy how she is caught having ‘woman’ thoughts with such a masculine exterior. With the voice Mr. Dorse chose for her, he doesn’t let us forget what she looks like, yet she does endear the reader with her gruffness and fierce loyalty.

If you haven’t read Kathryn Le Veque, and enjoy medieval historical romance, you do yourself a disservice. She carries you to far-off lands of a time of hardship, bravery and honor.

3 of 4 people found this review helpful

Dennis d'Vant is the son of a warfaring family. Although, in truth, his was a softer nature than those that surrounded him, he was fierce when angered or I'm midst of battle. On his father's demise, he only wanted peace for his clan and himself, so to that end he garnered a marriage contract with his clans bitterest enemy.
Lady Ryan was headstrong, not wanting to bend to anyone's will. When advised that she was to wed, she followed her instincts to flee. She ended straight into the arms of the man she was running from. Her new life had just begun.
This is a story of headstrong women, continuaĺy running from or into trouble. Fate is called upon, to solve some of the situations these ladies appear to get themselves into.
This is still an intriguing tale, although not up to the normal standard of this author.

Hard to sit through entirely

The narrator sounds like a really old man- and the different voices he acted out per each character was annoying. Ryan is nuisance and whiney.

but I cannot get past the narration! The narrator’s voice is deep, low and slow. I bounced between being anxious wanting it to go faster or I fell asleep. Since I could not listen to much it was hard to rate the story so I went by other works from the author.

I love Kathryn Le Veque’s stories, but this was ruined by the narrator. He speaks in what he imagines an ‘upper class’ Englishman would sound like and his voice is so ‘airy’ and he drawls together the words so it makes it hard to understand. And I lived in England and am half English, so the problem isn’t me understanding the accent. So sorry you chose this performer, otherwise the story is fantastic.

This is one of my favourite books and have read it numerous times so thought to purchase it on audible. To my horror the narration was terrible, its hard to listen and the character interpretation is awful, will not purchase this narrator again.