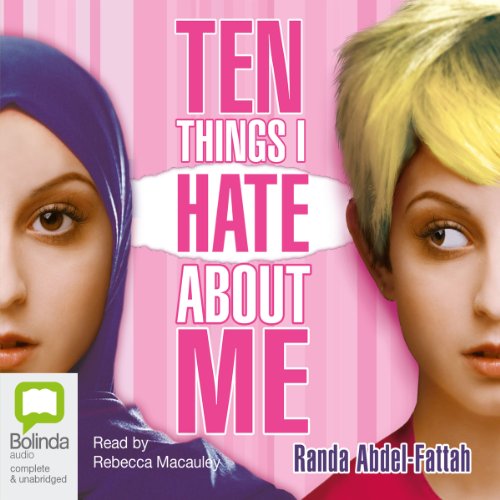 Ten Things I Hate About Me

Jamilah is Muslim, but none of her friends know that. She dies her hair blonde and even wears blue contacts to school, facts that would destroy her traditional father. Actor Rebecca Macauley easily adapts to a variety of voices, from those of Jamilah's angsty friends to that of her mature father. Mcauley's Australian accent adds to the performance's authenticity, but American listeners won't find themselves lost in the vernacular. Macauley's careful enunciation steps up to the plate. While the smart storyline captures attention, the relatable theme makes this audiobook resonate. After all, what teen hasn't felt like an outsider?

There are a lot of things Jamie hates about her life: her dark hair, her dad's Stone Age Charter of Curfew Rights, her real name – Jamilah Towfeek. For the past three years Jamie has hidden her Lebanese background from everyone at school. It's only with her email friend John that she can really be herself. But now things are getting complicated: the most popular boy in school is interested in her, but there's no way he would be if he knew the truth. Then there's Timothy, the school loner, who for some reason Jamie just can't stop thinking about. As for John, he seems to have a pretty big secret of his own.

"[T]he book will...appeal to teens who like stories about outsiders finding their place in the world." ( School Library Journal)

What listeners say about Ten Things I Hate About Me