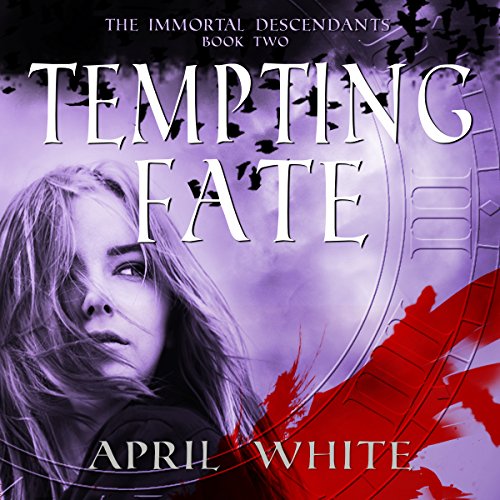 Seventeen-year-old Clocker Saira Elian is back on the run and being hunted by Mongers. The Descendants of War are amassing power in the 21st century, bent on controlling all the Immortal Descendants. Their attempt to kidnap Saira, a rare Descendant of Time and Nature, reveals just how brazen they've become. Archer, the vampire who has loved Saira for over a century, is willing to risk everything to protect her. When a horrific vision reveals Ringo, thief and loyal companion from 1888, being tortured at the hands of the bloodthirsty Bishop Wilder in a Renaissance prison, Saira and Archer realize there has been a ripple in the river of Time, and they must travel to 1554 to find its source and save their friend. Their rescue mission lures them to the Tower of London, site of the most notorious executions in history, where they encounter the mysterious Lady Elizabeth, who is confronting a terrible fate of her own. The time traveler, the vampire, and the thief will need all of their skills and ingenuity as they race against time to steal a document that could change the course of history and put the Immortal Descendants at the mercy of the Mongers. Can they stop a madman bent on collecting the blood of history's most powerful Seer before the executioner's ax falls?

Original narrator was much better

I cannot fathom why the author and/or publisher decided to have a British narrator read a book written from the perspective of an American teenager from California. Even more confusing is why she would read that character in her British accent instead of using an American one. The first narrator did a great job, and this book lost a lot of the power of the first one due to this curious and distracting choice. This audio also picks up quite a lot of unpleasant sounds from the narrator--such as loud swallowing--that detract from the narration. If there is a third book, I hope it's read by the original narrator, or at least someone who can do an American accent.

The story is almost as engrossing as the first volume, and it's well worth a credit if you can tolerate the narration issues.

Having the same narrator as the first book- it's easier to make a connection that way.

The narrator didn't differentiate between characters that well. Also had weird pauses in the reading.Her accent was inappropriate for the main character of the book.

Why in the world would a book told from the perspective of an American teen be read by a narrator using a Brit accent ?
The narrator for the first book was excellent - why they changed is beyond me.
For the story itself , It was annoying that the teen American heroine was that clueless as to her modern terminology was not appropriate to use when speaking with those from another age in the past ?

Let me start by stating that I love this series’s. But for audio listeners -
If you are at all sensitive to mouth sounds (swallowing, etc) the first 4 chapters can be difficult to stay “in”. It gets better - and then it’s just random chapters that you can hear this (7, 21, 27, 33). Book 1 didn’t have this issue and most of this book is fine :).

I agree with the others who have said they don't understand why Saira isn't voiced as American, but oh well. What drove me crazy in this recording was Gemma's terrible mouth noises and odd phrasing. But the sticky mouth and swallow were a constant and irritating distraction.

The story though is fantastic and awesome and amazing. Just maybe read this book instead of listen to it.

The story is top notch! Engrossing, blended fantasy & fact & I’ve already downloaded book 3 :-) I’ll be starting as soon as I finish this reveal… My only problem? Mispronunciation (& NO, I’m not talking about inflection preference/Stylistic choices) these take me out of the story. unfortunately, this happened in book 1 and book 2, a few words each… Not enough to stop me from listening though!

This is such a good series! Each book is as exciting as the one before! April White is an amazing author and I look forward to next in series!!

The story though kinda confusing as an audiobook is entertaining. The narration not so entertaining. So many times I had to grit my teeth because I could hear her swallow so loudly over and over. I assume she recorded using bluetooth equipment because no other way to hear her swallow like that. If your going to drink or something pause the recording!! Book 1 was a better recording. I've bought book 3 because I want to finish the story but I really hope the recording is better.

I love this series, there is never a dull moment! if you are into shifters, vampires, premonitions and time travel then this one is for you!
one note about the narrator: she has a nice voice but I was a bit bothered by constant swallowing. But I'm one of those people who gets really irritated :)

I really like book 1, but in book 2 they changed readers I almost returned because it was hard to tell who was talking. The new reader has an English accent I don't know if the reason they changed readers is because they are in England when the main character who is 17 grew up in America. It is a good story but you need to really pay attention because there is a lot of time jumping, and a lot of characters with different abilities. This one was good but I enjoyed the 1st one more. You be your own judge.

Fantastic gripping tale that flips through time and visits Tudor England where the future Queen Elisabeth is imprisoned in the tower by her older sister Queen Mary.

Before you read this book make sure you start with Marking Time; at the moment it's free in ebook.