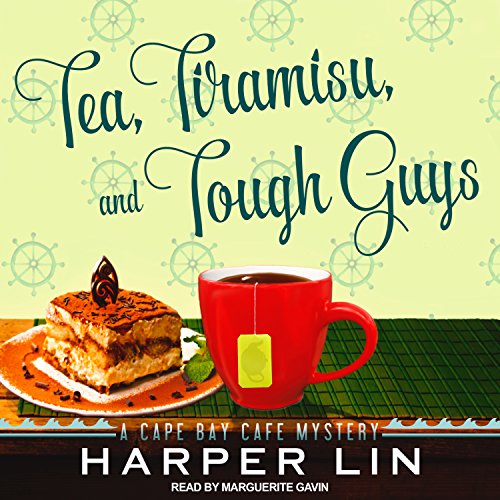 When Francesca's old high school crush, Todd, is accused of murder, she is convinced he is innocent. The police don't believe Todd's story, and neither does Matty. During the busy summer tourist season at Cape Bay, Francesca sets out to prove Todd's innocence. Matty, however, investigates to prove Todd is guilty. Why does Matty detest Todd so much? But what if he's right - what if Todd is a murderer?

If you enjoy Cozy Mysteries you won't want to miss this series. This was another great addition to the series. I highly recommend starting this series from the beginning. Harper Lin and Marguerite Gavin are a winning combination.

Loved it as much as I do Tiramisu, Chai Lattes, and a great book. Quick, fun, interesting. Characters you desire to know! And a quaint town you desire to visit!

Would you listen to Tea, Tiramisu, and Tough Guys again? Why?

I would & have listened again because it's a good story and Marguerite Gavin does such an exceptional performance with all the characters that it's easy to follow which character is speaking.

I liked that it wasn't easy to figure out who did it. Sometimes book series can be predictable but this one, so far, isn't

Which character – as performed by Marguerite Gavin – was your favorite?

I enjoy Marguerite's performances of all the characters