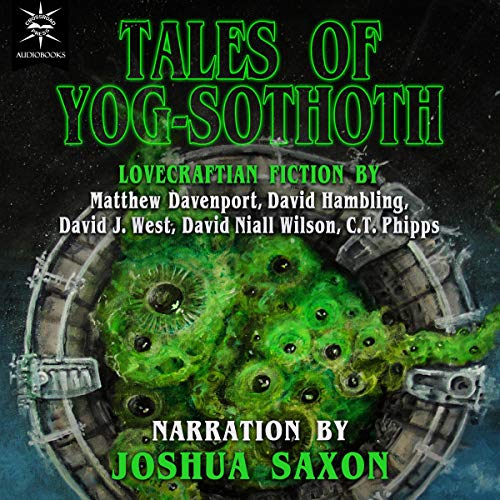 Yog-Sothoth, known as the Key and the Gate and a host of other names, is H.P. Lovecraft's most enduring creation after the Necromnomicon and Great Cthulhu itself. An eldritch god that occupies all time and space, Yog-Sothoth is most known for his role as the antagonist in The Dunwich Horror but has played a role in many other Cthulhu Mythos stories, sometimes as a being invoked for spells, others as a monster trying to enter reality, and a few places as a giver of hidden wisdom.

Whether pulpy heroes punching evil cultists, robed assassins hunting unnatural monsters, or rednecks dealing with monsters in their back yard, you won't be disappointed with the results. This book is a follow-up to Tales of the Al-Azif.

What listeners say about Tales of Yog-Sothoth

My first experience with Audible. Great story and the narration is outstanding. Voice inflection and characterization is great.

The first thing that jumped out at me about Tales of Yog-Sothoth was that Phipps, in the introduction, mentioned that this collection is going to be on the pulpier side of it, which honestly I didn’t quite know what it meant until I started to dive into each story. I’m glad it was because each story jumped off of the page without scaring the bejesus out of me or making me cry uncle because of too much blood/gore.

This collection of Lovecraftian horror features some huge names when it comes to this type of fiction. I’ve read lots of books by C.T. Phipps and a few (not enough) by David Niall Wilson. But I haven’t read anything by David Hambling, David J. West, or Matthew Davenport – and that’s going to change after this book. Every story jumped off of the page in a different way, but they all had a cohesive feel at the same time. I can’t quite describe it, but… yeah.

Tales of Yog-Sothoth had me wishing for more. Some of the stories were set in worlds that I’ve never read before and now that I know that, I’m left wanting more – which in this case is great. I’ll likely be looking each person up and picking up something from them – but if you’re looking for a great collection of stories that will leave you with your jaw hanging open but also some goosebumps and just that overall feeling you get when you read something awesome – this is it for you. Especially if you’re a Lovecraftian fiction fan.

Throw in the great narration by Joshua Saxon and, chefs kiss. This one is great. Definitely don’t miss picking this one up.

5 stars across the board!

This book was amazing! Loved every minute of each section. Couldn't wait to listen through to the next part each time and was sad when it ended. All the stories with their links to Lovecraftian Horror went from "Subtle hints" to "In your face" shockers!

Interesting collection of tales. Well written and unique and wasn't bored for an instant. Five stars.

Was This a Highschool English Project?

These are basically Scooby Doo stories set in the Cthulhu mythos. The good guys win every time with ease, while the antagonists are portrayed as idiots. The stories trivialize the power of the Great Old Ones and fail to even capture the essence of a good mystery, much less the macabre, hopelessness and horror of classic Lovecraftian writing.

Furthermore, not only do all the main characters have a very strong teenage fantasy vibe, but the supporting characters are all completely bland people whose only function seems to be to make the protagonist seem smarter/more powerful/cooler/less boring (and fails, by the way). The dialogue is horrible!

However, my biggest complaint is the amount of humor in these stories. Not just a comment here or there, but constant idiotic teenage "wit". The humor completely ruined what small immersion I could achieve with these stories.

I found this to be very comparable to Peter Clines' 14. If you liked that, you'll probably like this as well.

The only compliment I can give this collection is that Joshua Saxon's voice acting is fantastic, as usual. If it had been anyone else narrating, I would have returned this book. Still, I wouldn't recommend anyone else waste a credit on this.

This book is an abomination and not in a good Lovecraftian way!

Pulpy tales of the Mythos to

In his letters to friends and other writers, H. P. Lovecraft referred to their collective body of work as Yog-Sothothery, both since Yog-Sothoth embodied his nihilistic view of humanity but also since Yog-Sothoth touches all stories, in all places, at all times. These stories of humanity reacting to Yog-Sothoth's mere existence embody this intent and show how in the face of the entire roster of the Cthulhu Mythos, Mankind's true enemy is, and has always been, Mankind.


The True Name of God
Set shortly after the third crusade, two hashashin pursue an ungodly intruder through the streets of Acre. An engaging story with characters that jump off the page, consider this a definite recommend.


The Haunter of the Wheel
Minnesota, 1869. A grizzled lawman on the trail of stolen gold finds danger, corruption, a sultry seductress, and unimaginable horrors from being this world. A gritty western that has all the notes of Cowboys and Cthulhu excellently written.


The Ghost Door
A Harry Stubbs adventure through and through. This pulpy romp sees our protagonist lead a rescue mission around the world accompanied by bookhunter and adventurer Captain Cross. Encountering the missing, the mystic, and the monstrous, Harry needs to rely on his wits if he's to survive. An exciting jaunt, and well worth your time.


Andrew Doran and the Forever Gate
Set between world wars, we follow Andrew Doran, world-renowned archaeologist, monster-hunter, wizard, and repeated savior of humanity and the world as we know it. Approached by a snakewoman companion from his past, disappearances on a boat hint at Things Man Was Not Meant To Know running amok. Doran and his companion need to dive in and stop the End of the World.... again.


The Not Quite Right Reverend Cletus J. Diggs and the Dun-WHAT? Horror
Modern day. Cletus Diggs would love to just kick back with a beer and watch Nascar with his dog, Dog, but life is never that simple in Old Mill, North Carolina. Donovan DeChance, an old friend from California, brings dangerous news about the local and reclusive What-ley family, and the two will have to watch each other's backs as they venture into the night to shed some light on the matter. Far exceeded the expectations I had from the title, and I look forward to more tales with Cletus, Dog, Donovan, Asmodeus, Sheriff Bob, and Old Mill.


The Final Gate
A century after the rise of the Old Ones and the fall of human civilization, life is never boring for the half-shoggoth/half-human sheriff/mayor of New Ulthar. And when Mi-Go cyborgs try to kidnap the newest member of town, he's just going to have to step in and put a stop to all of that. A lurid tale that pokes fun at itself as much as it shows that the more things change the more they stay the same. This story is most steeped in the Mythos of this anthology, but those just encountering the lore will not be lost, a sign of the writers skill.

Yog-Sothoth is one of the more interesting Gods in the Cthulhu Mythos and I like how he is displayed here in this collection of stories.

While the stories all are on the pulpy side of the spectre, some of them very much so, it was still cosmic horror and i like how several of them might end "well" but still have lingereing consequences.
I wont go in detail on any of the stories, but they span a wide spectre of settings and there is something for anyone of a number of interesting settings if you (like I am) a fan of Call of Cthulhu.

I was entertained throughout the listen and was very fond of the Narrator.

*Full disclosure: I was gifted the audible book by one of the authors in exchange for a review.