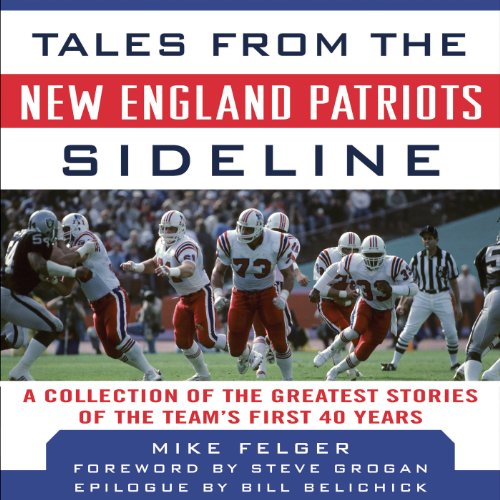 A Collection of the Greatest Patriots Stories Ever Told
By: Ernie Palladino, Mike Felger
Narrated by: Gregory Gorton
Length: 6 hrs and 3 mins
Categories: Sport, Other
4.0 out of 5 stars 4.0 (1 rating)

Narrator Greg Gorton does justice to Michael Felger's breezy stories about the New England Patriots with an equally light, straightforward performance. Felger provides a short history of the New England Patriots, lingering over key events in the team's comically-inept and cash-strapped past. Gorton's hint of amusement adds extra spice to stories such as how the team was told to avoid sleeping under the covers at a hotel while resting before a game because it would cost money.

However, this audiobook will bring a sense of pride to any Pats fan, as they know that to understand how far your team has come, you've got to know where they've been.

The best pats stories, with an epilogue by their most successful coach.

This revealing look at the first 40 years of the New England Patriots captures the stories of passion, power, and struggles of one of the most remarkable franchises in sports. True Pats fans know that while today the team’s owner, coach, and stadium all rank among the best in the NFL, the early years were a much harder road. For decades the Patriots was a team known for having comically inept management and ownership, as well as the worst stadium in the NFL.

What listeners say about Tales from the New England Patriots Sideline

Andre Tippett converted to Judaism? Lives in Sharon! Thank God for the Sullivan's. I live for this team every Sunday.