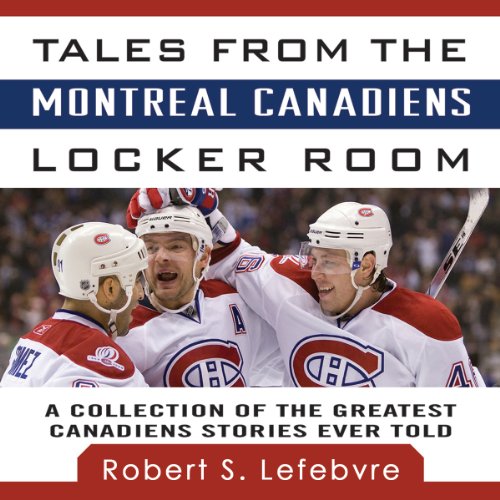 The book Tales from the Montreal Canadiens Locker Room: A Collection of the Greatest Canadiens Stories Ever Told details the lengthy history of the august team. The oldest franchise in the National Hockey League, the Montreal Canadiens have won more Stanley Cups than any other team. Sports equipment has evolved over the century-plus years that the team has been playing. But the essentials of ice, blades, elegance, and masculine swagger have never changed. The stories collected here follow the players on and off the ice, capturing the talent, discipline, glamor and rebellion of these skilled athletes. Robert S. Lefebvre has gathered a defining collection of stories here. Narrator J. P. Linton’s flexible voice shares historic details and fun folklore.

Relive the greatest moments of Canadiens hockey with this one-of-a-kind collection!

Now the 100-plus years of Canadiens triumphs, tragedies, and times like no other are captured in Robert Lefebvre’s Tales from the Montreal Canadiens Locker Room. In this unique compendium, Lefebvre brings to life both the history and the anecdotes of this incredible franchise. Stories of Maurice "Rocket" Richard’s incredible skills on the ice are paired side by side with locker room yarns and off-the-ice tales of Jean Beliveau, Dickie Moore, Serge Savard, Guy Lapointe, Patrick Roy, and more. With humor, wit, and a lot of adrenaline, Robert Lefebvre has compiled a collection of Montreal Canadiens stories sure to please any hockey fan.

What listeners say about Tales from the Montreal Canadiens Locker Room

A very poor history of hockey's most famous franchise. Absolutely terrible. I would not recommend this to anyone.

not very well translated - written in French and translated into English. the narrator mangles a lot of words.

there is nothing about the locker room here. this is just a narrative of Habs history.

quite boring in parts, too.