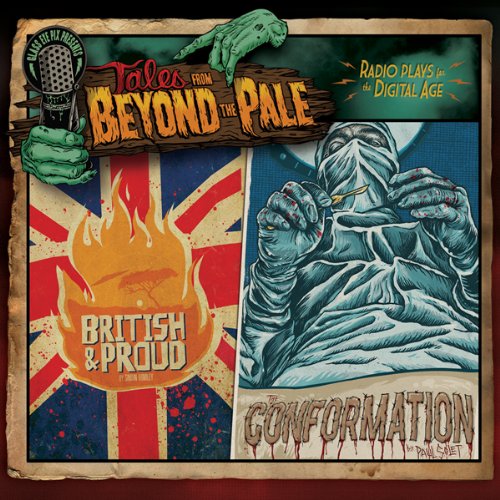 Tales from Beyond the Pale, Season One, Volume 2

Conceived during a fog-drenched car ride with nothing beyond the windshield but a horizon-less void, Larry Fessenden and Glenn McQuaid created the acclaimed Tales from Beyond the Pale, audio theater inspired by the vintage radio shows of Alfred Hitchcock and Orson Welles.

Volume 2 features two episodes from the first season, including "British & Proud" by Simon Rumley and "The Conformation" by Paul Solet. Please note that "British & Proud" is rated X and suggested for mature audiences only. The series was produced by filmmakers Larry Fessenden, Glenn McQuaid and Lisa Wisely.

In "British & Proud", written and directed by Simon Rumley, a young British fellow marries an African woman and gets a lot more than he bargained for when he travels to the continent of her birth to meet her family and tribe for the first time. It's a pulpy shocker from Rumley, the English writer-director of the films The Living and the Dead and Red White and Blue. Produced by Bob Portal in England.

In "The Conformation", written and directed by Paul Solet, a plastic surgeon obsessed with creating the perfect form falls for a patient obsessed with becoming it. The two lose themselves in a synchronistic psychosis that culminates in a realization of dreams more grotesque than either could have imagined. From award-winning writer/director Paul Solet, whose debut feature Grace had grown men fainting, comes a tale so distressing we have rated it….

"Fans of shows from ‘A Prairie Home Companion’ to 'This American Life' [who] take their stylistic cues from radio’s glory days should enjoy these macabre R-rated tales." ( The New York Times)
"ONE OF THE YEAR’s TOP 10. The team at Glass Eye Pix and the filmmakers they’ve assembled are very much crafting great little spookfests that remind us why we love horror storytelling in general." ( Fangoria)

What listeners say about Tales from Beyond the Pale, Season One, Volume 2