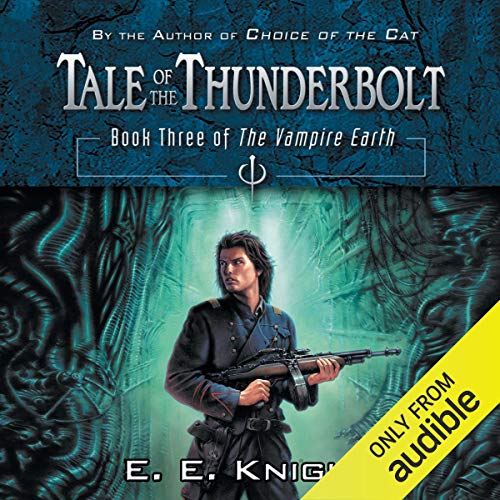 Tale of the Thunderbolt

Tale of the Thunderbolt

It's the 48th year of the Kurian Order. The alien, vampiric Kur and their avatars, the Reapers, control most of Earth - their new feeding ground. Humanity is scattered and survives only at their new masters' whims.

But the Resistance is attempting to reclaim Earth. David Valentine, member of the elite Cat spy force, is in enemy uniform aboard the aging gunboat Thunderbolt. Whispers have reached him of the discovery of a long-lost weapon in the Caribbean - the first glimmer of hope for humanity to finally defeat the Reapers. Control of the ship lies in the hands of a tyrannical captain, and nothing short of full-scale mutiny can win it back. With only a few loyal sailors at his side, Valentine embarks on a terrifying journey through the deadly waters of the Gulf, searching for the weapon that will guarantee that this year - the 48th year of the Kuran Order's domination of Earth - will be the Kurians' last...

What listeners say about Tale of the Thunderbolt

War is just one damned thing after another.

David Valentine is a Cat- a spy and covert ops agent fighting the aliens who have all but conquered Earth and made it their feeding grounds. Under a fake identity, he's infiltrated an enemy gunship as an officer, and done things that burn his conscience to gain the position of trust he needs for his mission to retrieve a weapon he knows nothing about. When his backup doesn't arrive as planned, he has to improvise, and winds up working with pirates and rebel forces with agendas of their own. To get their cooperation, David must help defeat their oppressor.

When he gets to his destination, he finds a stranger ally still: a Kurian turncoat who his Lifeweaver kin have dubbed 'The Once-ler', and who had a history with David's father. Taking their new weapon out for a little field test, they wind up sparking a full-scale rebellion. And the trip back is no picnic either, with betrayals and naval battles and armies of sentient rats.

I have enjoyed all of the Vampire Earth so far. It is a wonderfully developed world.

Very good series to have in your library.

I love this series, it is an amazing storyline. I like listening to these books.

I love this series, even took it overseas to Iraq with me. keep up the good work.

The Vampire Earth series goes from strength to strength with themes drawn from the US War of Independence, the Bible, a thousand Western novels this is on one level good old fashioned escapism with a contemporary twist but EE Knight's vision of strong characters male and female, black, white and brown is a kind of Obama era heroic fantasy and none the worse for it.