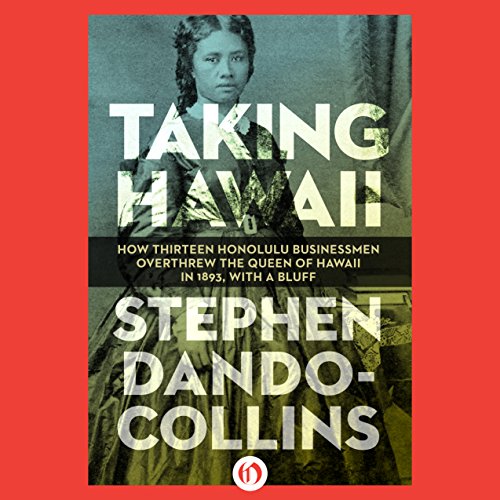 On a January afternoon in 1893, men hunkered down behind sandbagged emplacements in the streets of Honolulu, with rifles, machine guns, and cannon ready to open fire. Troops and police loyal to the queen of the sovereign nation of Hawaii faced off against a small number of rebel Honolulu businessmen - American, British, German, and Australian. In between them stood hundreds of heavily armed United States sailors and marines. Just after 2:00 p.m., the first shot was fired, and a military coup began. This is the true, tragic, and at times amazing story of the 1893 overthrow of Queen Liliuokalani of Hawaii and her government. It's also the story of a five-year police state regime in Hawaii following the overthrow, an attempted counter-coup by Hawaiians in 1895, and of how Hawaii became a United States possession.

In Taking Hawaii, award-winning author Stephen Dando-Collins (Standing Bear Is a Person, Legions of Rome, Tycoon's War) reveals previously little-known facts uncovered during years of research on several continents, in the most dramatic and comprehensive chronicle of the end of Hawaii's monarchy ever published. Using scores of firsthand accounts, this often minute-by-minute narrative also shows for the first time how the queen's overthrow teetered on a knife's edge, only to come about purely through bluff.

Taking Hawaii plays out like an exciting novel, yet this tale of a grab for power, of misjudgment and injustice, truly took place. Judge for yourself whether you think the queen of Hawaii was wronged, or was wrong.

What listeners say about Taking Hawaii

An Excellent Piece of Writing Ruined by Narration

This exhaustively researched history should be mandatory reading for all Americans, especially those who travel to or live temporarily in Hawaii.

Whomever is responsible for the selection of the narrator should be fired. Apparently the only requirement for the job was to be an Australian, presumably to make the narration more "authentic" since the author is an Aussie. I would have added other qualifications, such as a demonstrated familiarity with the English language, a work ethic that included rehearsals, and the lack of a speech impediment. Audible owes anyone who purchased this version an apology and a free replacement.

I just moved to Hawaii and noticed the museums have a very biased view of the taking of Hawaii. I bought this book to hear the Hawaiian side of the story. It's a well written and engaging book full of well-researched facts. I highly recommend except for the narrator. Not only does he mispronounce common Hawaiian names and words, like Kamehameha and haole but he mispronounces them differently and inconsistently. He's really awful and it takes away from the story. He's so poor I would recommend reading this book rather than listening to it. It's sad this wasn't caught.

Story line may get better but I can not continue to listening to bad hawaiian language this is like a Hawaiian trying to speak Spanish I wanted to hear the story not correct every bad pronunciation! I need to exchange this book for another

This is too important a book to have it ruined by a narrator without a clue.

Not only does David Franklin badly mispronounce most Hawaiian words, he sometimes alternates between various mispronunciations of the same word, including the name of Hawaii’s most important historical personality, Kamehameha The Great.

Shame, shame, shame, on Audible Studios, which claims to take care of their authors. They absolutely did NOT take care of Stephen Dando-Collins by issuing this pathetic travesty and laughing stock of a most important work.

What would have made Taking Hawaii better?

Reader without an accent.

Has Taking Hawaii turned you off from other books in this genre?

Would you be willing to try another one of David Franklin’s performances?

It answered my question about how the US stole Hawaii and how white men perceive their power over non-whites and women.

The book itself seems to have been well researched and clearly written, but that is marred by the odd cadence of the narrator. He has a habit of pausing in the middle and the end of some sentences (almost as if stopping to turn a page) for just long enough that you think the chapter has ended ... when it hasn't. For the first couple of hours I found myself continually checking to see if my player had paused for some reason, only to hear him start up again. Eventually it just became annoying, but manageable. Maybe some of this can be chalked up to editing issues.

Starts well then quickly runs out of steam. Terrible narration.

I was really looking forward to hearing this story and it started well enough. Unfortunately from chapter 8 onwards it moved from being an historical account to a mix of historical text and novel. There are too many verbatim quotes from key protagonists that add little to the story (and because the narration is so unbelievably terrible) make listening to this story an incredible chore.
The narration is the worst I have heard in any Audible book and sounds like it is completed by someone that has little interest in punctuation or pronunciation. Sentences run into one another and very simple punctuation is overlooked.
The butchering of Hawaiian pronunciations in particular borders on offensive. I'm Australian and it offends me to hear it. As does the attempt to produce American accents when delivering verbatim quotes. Unfortunately the poor narration is what is remembered of this book rather than the story itself.

Mispronunciation of the Hawaiian language is annoying

The story is great but the reader mispronounces many Hawaiian words as Ali’i and Paniolo to name just a few. It is very distracting to hear the words and names of Royalty slaughtered. The reader should have checked how words are pronounced more carefully. Hawaiians deserve the respect of proper pronunciation

Very interesting story.Poor narration.The narrator doesn’t seem to understand punctuation at all.Painful to listen to,but still worth it to understand how Hawaii became a state.

It sounds as those the narrator is reading the book for the first time. Punctuation was added or dropped by narrator. Narrator ruins the story and I assumed must have been a relative of the author. Sometimes actually repeats entire sentences since reflection the first time was do poorly done. I have listened to over 50 audible books and this was the worst narration. I nearly quit he was so bad. Did anyone ever listen to narration before sold to public? Don’t think so. I would never listen to this narrator again

A very good book about an event in history I was unaware of. Well written and detailed.

The reader was ok, but he does tend to pause mid sentence.....a lot!!! It is very off putting and counts for the 3 stars.