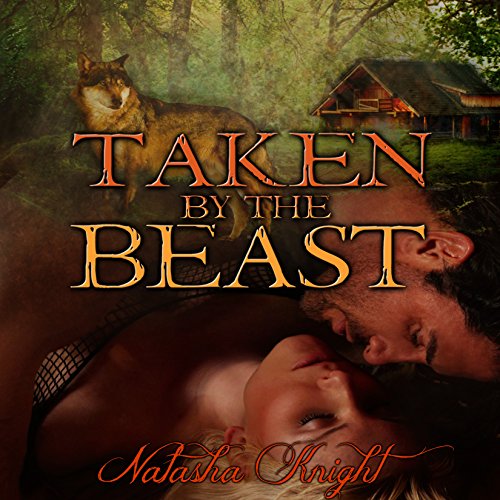 Taken by the Beast

Elijah had watched Kayla for years, serving as a hidden protector for this beautiful young woman-until the night an abusive boyfriend sought to do her harm. Afterwards, he knew that there could be no hiding what had happened, and she would have to come with him whether she liked it or not.

Try as she might to convince herself that her eyes had deceived her, Kayla knew that she had seen a giant wolf toss men about like ragdolls and then shift into the human form of her neighbor Elijah. Then, before she can even begin to process what she has seen, she finds herself thrown over his shoulder and carried from her apartment against her will.

In spite of Elijah's insistence that their flight from the city to a cabin deep in the woods is for her own safety, Kayla attempts escape at every opportunity, but she finds that he is more than prepared to compel her obedience and he will not hesitate to spank her soundly when she makes it necessary. Worse, she soon learns that repeated defiance will earn her a punishment far more shameful than just a bare bottom spanking.

As the days pass, however, she begins to see in Elijah a kind of loving care and concern that no man has ever shown her before. Stranger still, as she stands before him naked and blushing, waiting to be thoroughly chastised for disobeying him yet again, she begins to want him in a way that is so fierce it terrifies her.

Elijah swears to himself that he has taken Kayla only to keep her safe, but in his heart he knows that is not true. His instinctual need for her-the overpowering urge to claim her as his own-grows stronger with every passing hour, and it is only a matter of time before he loses control and takes her. But can he keep her safe from those who would use her to get to him, and even if he can, can the primal lust between them ever grow into an equally powerful love?

What listeners say about Taken by the Beast

Not So Traditional Shifter Romance

This not so traditional shifter romance had me breathlessly reading along the whole book through. I loved the tension & frustration both characters gave me as I read this. This is not a flowery romance, but gave me immense satisfaction anyway & hit on some of my secret fantasies that are not quite consensual, but her body knows more than her mind what she wants. The punishment scenes were HOT! Yum! I can't wait to read the next in this series!

No one told me shifters books were so hot! Natasha Knight brings us Elijah and Kayla's story. Kayla is a woman caught in with the wrong crowd and is about to be raped. Elijah, the last werewolf of his clan comes to her rescue and their adventure begins. They are on the run from those trying to capture and breed the clan. Their relationship begins antagonistic, after all Elijah kidnapped her, but after he spanks her, it takes a turn. His punishments are harsh but at the same time, he is very loving. The scenes between Kayla and Elijah are intense, sexy and oh so hot. Through the twists and turns in this book, you can't help but fall for Elijah and respect Kayla for coming to terms with who she is both in and out of the bedroom.

Philip Alces, as always gives an incredible performance of this book. He is voice for Elijah makes you melt! His voices carry emotion and warmth giving the perfect narration.

This book is crazy good!!! Elijah has a bit of a bossy problem, but he is just trying to save Kayla's life, Right!? Kayla doesn't believe the craziness that she has seen and is now a part of!! But she is weirdly attracted to Elijah and doesn't like it at ALL!! THEY go through some crazy mess, but the CHEMISTRY between these two is OFF THE CHAIN!! It is a little dark, and Elijah is a prick for a while, so if that's not your cup of tea, this book isn't for you! I absolutely loved it, after I decided that Elijah didn't have to die!! LOL!! The Narrator Phillip is ABSOLUTELY AMAZING!!! I can't wait to get to another book that he narrated!! He brings such life to these character's!! His voice is deep, and he truly act's this book out!! Cheers!!

A man being on a woman is not a turn-on for me. Very bad story.

I really liked this book, like I do all of Natasha Knights books. Its not as long as most of her other books but a good story. I wished it was longer

The Sex is Off the Charts HOT!

Good book. I enjoyed the storyline very much and the characters likable. Would have been even better with a male and female narrators. This story had a different twist and I enjoyed it very much.

WHAT THE HELL!!! This book has a forced seduction. This book has a hero who "disciplines" the heroine with spankings even though she says NO. She fights, she isn't into that lifestyle.

That shit is NOT sexy.

If the author nixed the gratuitous spanking thing then i may have had a more open mind regarding this story but having the heroine nearly gangraped by her boyfriend and his friends to only hours later having the hero pull down her pants and panties to put her forcibly over his knee to spank her is WRONG. Taking her from an almost rape to throw her into another rape situation is unacceptable.

To use the ole my mind says no but my body says yes excuse is kinda irresponsible. I want to give this author another shot with a different book because her synopsis' do draw you in but I'm very hesitant.

Ridiculous and hard to finish.

The story was actually one of the worst I've ever heard. So far-fetched. Don't bother.

Enjoyed this book, lots of twists and turns keeps you interested highly recommend this book..