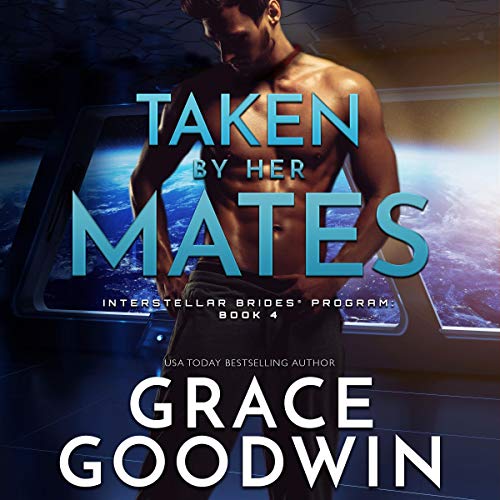 Taken by Her Mates

Taken by Her Mates

After being set up and found guilty of a crime she didn't commit, Jessica volunteers for the Interstellar Bride Program to avoid a lengthy prison sentence. She is assigned to a prince, the heir to the throne of the powerful planet Prillon, but her future is left in doubt when the match is rejected by Prillon's current ruler.

When his own father seeks to banish him and deny him his right to a mate, Prince Nial takes matters into his own hands. Accompanied by a battle-tested warrior who volunteers as his second, he sets out for Earth to take what is his, but upon his arrival he quickly discovers that the same horrifying enemies who once took him captive now hunt his mate as well.

Though believing she has been rejected by a mate she never even met stings more deeply than she would like to admit, Jessica does her best to focus on the dangerous task of bringing down the people who framed her. But before long, her world is turned upside down all over again when two huge, handsome aliens save her life and then inform her that she is their matched mate and they have come to Earth to claim her.

Jessica is far from ready to meekly submit, but she soon learns that her new mates expect to be obeyed and defiance will result in a painful, embarrassing spanking on her bare bottom. Despite her fury at such treatment, however, she cannot hide her arousal as she is stripped bare and thoroughly mastered by the fierce, dominant warriors. But when Prince Nial is forced to defend his birthright, will Jessica do what must be done to aid him, even if that means allowing his entire world to bear witness as she is taken by her mates?

Perfect for an extremely sexy time out. Jessica is framed for murder and drug trafficking and her only out is to apply as an Interstellar Bride. The Prime of Prillon denies her transport when she is matched to Prince Nial, due to his physical damage from the Hive. Nial and his second, Ander, go to Earth to collect her. They have to evade the Hive scouts sent to abduct Jessica; expose a drug cartel; earn the loyalty of The Colony warriors; and fight to the Death for leadership of Prillon.
Goodwin does a good job of writing characters, dialogue and action consistent with her world building, and the larger series story arc.

Pottsworth and Conway do a decent job of narration. I really like the dual narration; especially where he reads the chapters written from the male POV, and she reads the female POV.

This audiobook story was about a woman in The a Interstellar bride program who gets denied transport to her matches mate at the last minute. Upset, she goes back into her world determined to prove she was set up for the crime that got her into the Interstellar mate program. Little does she know, it was her mates father who denied her transfer because his son, Prince Niall Of Prillum Prime, was altered when he was captured by the Hive. When Niall finds out, he and his second travel to Earth to find her and take her back with them to the Colony. Narration was well done, if a little stilted at times. There are a couple of explicit sex scenes, just FYI.

i love this one hot reads and simple pleasures. i love all the books in this SERIES

everything i waited for

This series is Hot & Steamy

I really enjoy these interstellar bride books. Although the stories are short it packs a lot of hot sex, action and a very decent plot in it. This author knows how to move the story from the woman being hesitant to all in and then let the fun begin!

My Favorite in the series so far!

The story was longer than the other novels in the series and it just added to the main characters development! I honestly wish it was longer though there is soo much more that could've been done!

Taken by her mates

Another great book by Grace Goodwin. I liked the characters in this book very much. I loved the offing making love 💘 on a throne chair of all places indeed. Some times in the book I wanted to be Jessica in love with too men.