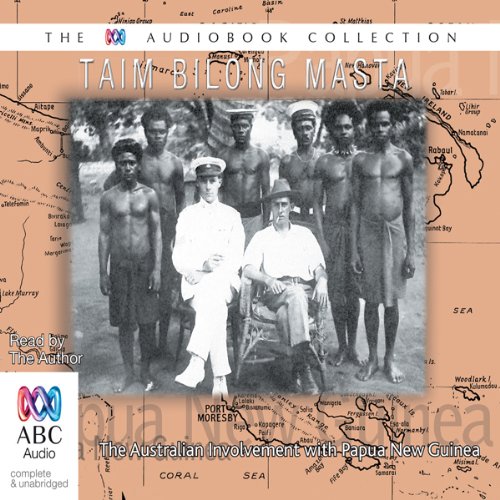 In 1979, the idea of an oral history based project on the administration of Papua New Guinea germinated at the ABC, driven by Tim Bowden and Daniel Connell. This massive undertaking involved the recording of 350 hours of tape recorded interviews with Australians and Papua New Guineans who had been involved with Australia's colonial administration which ended with self government and independence in 1975. The result is a superb 24 program social history, so evocative of a time and place, revealed through a tapestry of voices from those who lived through it. These are first-hand accounts of the pre-war history in the early 1900s, the masta-boi relationships, the gold rush and the exploration of the highlands. In Taim Bilong Masta, Australian men and women who spent so many years living and working in Papua New Guinea before independence in 1975 can be heard again, telling their own stories.

I’m living in PNG and was highly motivated to learn about the history which is why this was so sad.

The fact that it was told by the white people who lived it PNG without any insight and with the racist colonial ignorance that was “normalized” during that time made me feel like this should have been a footnote in a better researched contemporary story.

Times have changed and I can’t see how this kind of rubbish helps to recognize what really happened in the past as I’m looking for a balanced perspective.

Should be compulsory to all Queensland schools

Well made historic recordings from the people w who where there just can not beat that.

Long before podcasts, before websites where you can sometimes track things down, and definitely before the ABC was forced into repeating programs four times every week, I remember hearing a few episodes of this. I remember how interesting it was, but at that time in my life I never managed to lock the program time slot into my schedule, and I was sorry when I found it had finished and I had missed almost all of it. So it was with great delight when I found I could have the entire lot of it in my library.

This is a body of work that Tim Bowden should be well proud of. It's a massive effort. These are the voices of people who lived through Australia's occupation / administration of PNG, and they all paint a vivid picture of life as it was at that time, through the best part of the 20th century. 30-40 years after some of the events being described you can still hear the emotion in these voices. Some people were terribly disturbed by what they saw, and you can hear their pain. Despite the bare-faced racism of some of the contributors it's a real treasure. I even heard the voice of someone I used to work with in 1976!

God knows what I'm going to listen to next. It's a hard act to follow.

Brought back many great memories of my 20 plus years in the country. And gives a true warts and all view of the good and the bad of Australia's time governing PNG.

The mix of oral history, journalism, and the historian Henry Nelson make this addictive listening. It is part of Australian history, as a Coloniser and differs somewhat from our disgraceful history in regards to Indigenous Australians. But be warned the oral history is framed in the colloquial language of the time- "boy" and so on which is unsettling. A highly recommended listen or read.

What did you love best about Taim Bilong Masta?

Wonderful first-person recollections from Papuan and Australian men and women who participated in Australia's settlement of PNG from before WWI to WWII. Amazing "Indiana Jones" types who grappled with the tropical jungle, isolated tribes, Germans, British bureaucrats....etc.