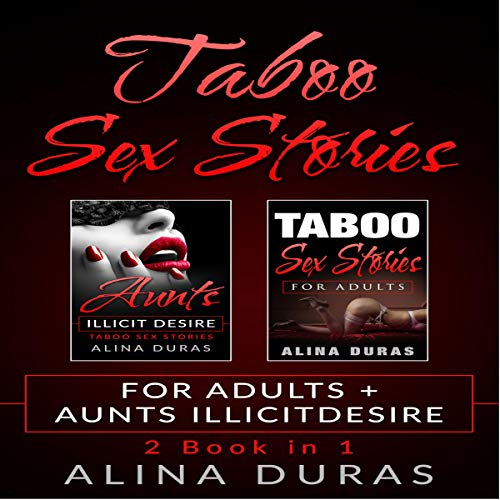 Eighteen-year-old Matt is determined to find a job in London. He stayed with his Aunt Catherine while he went to interviews. His Aunt was a sexy, carefree woman, who was divorced and lived a glamorous lifestyle in London’s Docklands.

Living with Aunt Catherine Matt saw her with new eyes. Her beauty radiated each time she entered the room. It wasn’t long before he developed taboo feelings for her, those that took control of his body and wouldn’t let go.

Will Matt be able to keep his naughty thoughts to himself? Will he take a chance to see if they would be returned? If they are mutual will they both risk tasting the forbidden fruit, will they be able to keep it a secret or will their encounter forever change their lives?

Calvin knew that his wife had been working hard and needed a break from her job. He decides to surprise her with a romantic beach adventure. He’s ecstatic when Trish agrees to his suggestion.

Then his hopes of a romantic getaway end when she suggests that they invite both of their Mother’s and turn it into a family event. All of his dreams of a having some quality time together quickly disappear with her suggestion.

As they arrive at the beach both Mothers are like youngsters as quickly change into their bathing suits and make their way to the sand and beach. When Trish’s phone rings, Calvin fears for the worst. His fears are right, for she breaks the news that she has to leave for her job.

Will Always Be Yours

A blood-curdling screen came from the bathroom. Josh knew his Mother was in there taking a shower. As he discovered the door locked, his Adrenaline went into overdrive and he was able to break down the door.

He discovered that his Mother had fallen in the shower. Quickly he turned the water off and looked to see if she had any injuries. He then got her to a safe sitting position and called the paramedics.

At the hospital, he learned that she had sprained both of her wrists. The Doctor told him that he would have to become her primary care provider.

As he took her home and helped her dress, he began to notice her curves and beautiful figure. He knew those forbidden thoughts as he was having was strictly taboo, but will their close quarters have him acting upon his thoughts?

One of worst books ever tried to listen to. The stories could have been good, but the narrator sounds extremely horrible. It's like someone trying to talk sexy while cotton balls stuffed in her nose and mouth.
Any potentially entertainment of this book is ruined by the poorly talented narrator.
I will actively avoid any book narrated by Kate Black.

Check it out if you're looking for a hot,

Check it out if you're looking for a hot, steamy read with a complicated alpha male and loving heroine.

The stories are good but the narrator killed it!

The narrator sounded like she was clogged up and only had one tone, which made it had to distinguish which characters narrative she was reading.

trying to listen to this hut the narrator has an awful voice. sounds like she has a nasal issue.

the storyline was pretty good, but the narrator was not so good. felt like she was reading straight from a script.

The story is good, but the performance is sub par. Tjhe reader needs morepractice with the teleprompter.

This is one of the worst erotica books I've encountered. I'll stick to the classics that have a good story line and narrative, like the ones by Anais Nin. Kat Black sounds like a third grader trying to read an adult book that's beyond her grade level, no nuance, no inflection, just flat reading. Never never again.

I couldn’t get over the narrators voice. Had to stop listening before the end of the fiat chapter.

have to listen at 1.5 to 1.75 speed. narrator reading is distractingly choppy. stories a bit much

Read by a child?

The stories overall are pretty good, unfortunately the narrating is terrible. Not only does the narrator sound like a prepubescent boy, they also sound like one who is still learning to read full sentences.

This could have been great, but unfortunately can only be classed as just ok due to the narration.

This audiobook is really great for taboo sex stories. The author like sex stories for adults. Recommended

I enjoy listening this audio book.

The ideal closure of this two-part harmony that is fun and attractive, just as engaging and captivating. It's an extremely remarkable book. I truly appreciated these stories. I might want to suggest this audiobook to the other individuals.

Oh Yeah! just do it!

Sexy, fun, compelling, yeah this pretty much has it all... and I loved each one!! The male characters are delicious and the sex was varied and different from the usual. I loved that while the story lines were interesting they didn't dominate the relationship of the characters.

I completely delighted to perusing this audiobook. It was fascinating the entire path through. I was happy to such an extent that it had an upbeat completion. Because of the Author for this audiobook.

I can’t wait to find out the rest of their story. This was a great story!! I'm anxious to find out what happens next! Didn't know it was a cliffhanger, can't wait for the next audiobook.

A nice taboo Sexy Games audiobook that makes my dream come true! The author did a great job of inspiring her listeners to be more courageous with women. If you want to approach a lady with a higher chance of success, this book is your starting point!

I just walked out of a depressing relationship, this Taboo Sexy Games audiobook so far is a game-changer for me, at least gives me more confidence to move on to romance the next one in line!

Sometimes I have this tremendous misguided judgment of how to expand closeness in a marriage. I believe and accept what I get to see in the magazines, blogs or movies trusting I’ll have an existence of more joy and satisfaction. This audiobook explains what intimacy and lovemaking truly are. The authors underscored the significance of being audacious and open on having a go at something new.