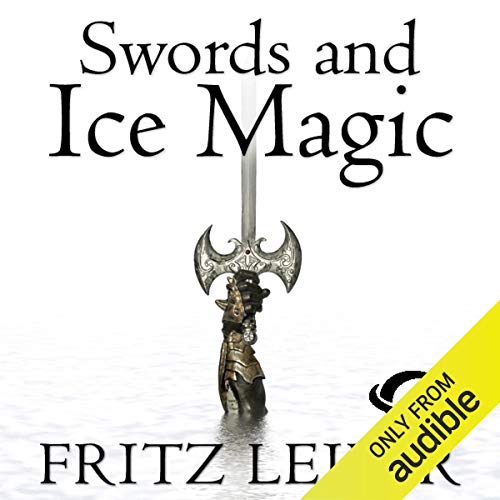 In Swords and Ice Magic, Fafhrd and the Gray Mouser have traveled the width and breadth of the land of Nehwon in search of adventure and fortune. Now lost at sea, their ship drawn out on the Great Equatorial Current, their journey brings them to Rime Isle, a tragic island populated by vagabonds and wanderers. The island is also home to a race of gods, schemers, and manipulators that plague the humans for their amusement. Will Fafhrd and the Gray Mouser be able to escape the island, or be trapped forever as pawns of the gods?

The late Fritz Leiber's tales of Fafhrd and the Gray Mouser launched the sword-and-sorcery genre, and were the inspiration for the fantasy role-playing game, Dungeons and Dragons.

What listeners say about Swords and Ice Magic

I missed the introduction to the book from Niel Gaiman made conspicuous by it's absence.

“I am tired, Gray Mouser, with these little brushes with death.”
“Want a big one?”
“Perhaps.”

Swords and Ice Magic is the sixth collection of Fritz Leiber’s stories about Fafhrd the big northern Barbarian and his small thieving companion the Gray Mouser. The stories in the LANKHMAR series have generally been presented in chronological order, so we’re nearing the end of Fafhrd and the Gray Mouser’s adventures in Nehwon and its famous city Lankhmar. The tales in this particular volume were published in pulp magazines in the mid 1970s and were collected in this volume in 1977. They are:

“The Sadness of the Executioner” — Death is required to kill two heroes before time runs out and he’s got Fafhrd and the Gray Mouser in mind. But Death is a sportsman and thinks heroes should go out with style, so when the duo outwits him, he refuses to pull a deus ex machina and the boys live on.

“The bait” — Death baits the boys with the image of a naked “nubile girl.” This short vignette has Mouser saying the repulsive line “She was just the sort of immature dish to kindle your satyrish taste for maids newly budded.” (Ugh! I can’t believe I read this stuff!)
“Under the Thumbs of the Gods” — The gods, upset that the most famous thieves in Lankhmar no longer pay them any attention (not even bothering to use their names in vain!), decide that Fafhrd and the Gray Mouser need to be taken down a few notches. They’ve been listening to the boys boast about their romantic exploits, so the gods decide to hit them where it hurts and arrange for the duo to be rejected by every (naked and nubile) female they’ve ever loved.

“Trapped in the Sea of Stars” — While sailing, Fafhrd and the Gray Mouser became enchanted with a couple of shimmer-sprites who appear as young nubile girls. (Yes, again!) The sprites have drawn the guys into uncharted waters where no land is in sight. Eventually, after philosophizing about the nature of the sun, moon, and stars in space, Fafhrd and the Gray Mouser realize that the sprites may have nefarious motives.

“The Frost Monstreme” and “Rime Isle” — Fafhrd and the Gray Mouser are bored and reminiscing about past loves in their favorite tavern, The Slippery Eel, when two beautiful (nubile, but not naked) girls walk in and ask them to help the Rime Isle fight an impending invasion by the Sea Mingols. In this novelette and novella, Fafhrd and the Gray Mouser are possessed by the gods Odin and Loki and they once again cross paths with the two invisible ice princesses who we met a while back in the novella Stardock. Together, these two stories make up most of the page count of Swords and Ice Magic. There are plenty of young nubile girls in this one, and lecherous men fondling their breasts, but there are two strong women, too. I didn’t think the Odin and Loki angle worked very well (Leiber has attempted to tie Newhon to other worlds, including our own, in a few of his stories). There’s a big twist for Fafhrd at the end of “Rime Isle.”

At the time the stories in Swords and Ice Magic were written, Friz Leiber was in his mid 60s and had been writing these adventures for more than 30 years. Now Fahfrd and the Gray Mouser are getting older and talking about retiring and settling down with mates. Generally, this batch of stories is not as exciting or creative as the earlier ones, the setting of decadent Lankhmar plays a disappointingly insignificant role, and Lieber’s prose seems less brilliant. I’ve always had an issue with the way Lieber portrays women, but this volume seems to have an inordinate number of young nubile girls with small breasts who get fondled by older men, and there are numerous references to, for example, a “delicate tidbit of girlflesh.” In “The bait,” we’re told that the girl looked no older than 13 though the expression on her face suggests she’s 17. In the first story, Mouser tames a young female warrior who’s trying to kill him (she shoots spikes from her pointy metal bra) by “ravaging” her. Leiber certainly isn’t the only speculative fiction writer whose writing grew more lecherous as he got older, but it’s disappointing to find it in a series that I have enjoyed so much.

Even with these issues, there’s no doubt that fans of Fafhrd and the Gray Mouser will want to read Swords and Ice Magic, especially the last two stories about Rime Isle because of what happens to Fafhrd. I highly recommend the wonderful audio version produced by Audible Frontiers. Jonathan Davis narrates these and even though he manages only one female voice for every female he reads, his voice is beautiful and his ear for the dialogue and pacing is exceptional. I love the way he portrays Fafhrd and the Gray Mouser.

A Magical Escape from Reality

Great narrator, he voices each character differently. This adds another level to the stories. The stories contain Fhafrd & the Grey Mouser's most interesting female companions, so far.

The writing is amazing. I own all these books on the Kindle and that’s how you should read them. The narrator doesn’t care, or worse, isn’t good. Characters are given voices that are immediately dropped, and his quiet, somber, (and sometimes too-cool-for-school) attitude doesn’t accentuate the exciting nature that sword and sorcery should give off. If you want to read these books, audible isn’t the way to do it.

not the best in the series

I've loved this series, but this particular book took forever to finish because the majority of it was painfully hard to get into. finally the last few chapters held my interest.

A real slog to finish, a really terrible book not worthy of your time, okay?