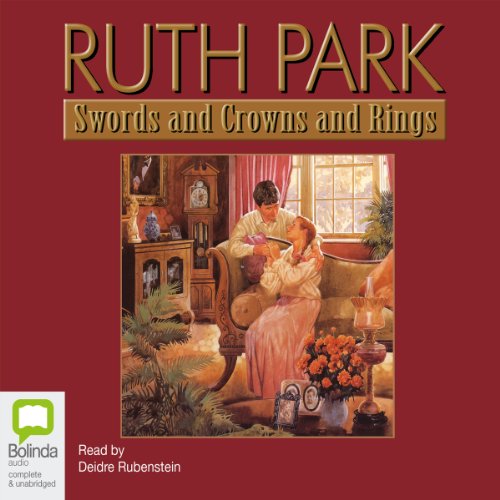 Swords and Crowns and Rings

Ruth Park's saga follows Jackie Hanna, a man whose inner strength and beauty is squashed by many, including Jackie's own father, who can't overlook his dwarfism. Jackie finds a kindred spirit in Cushie Moy a beautiful girl who lives nearby and with whom he creates a lush inner world - but outsiders refuse to overlook their physical differences. They grow up in rural Australia during the early 20th century and, with the depression, hardships follow. Deidre Rubenstein compassionately performs the audiobook, making Jackie's personal Odyssey relatable while retaining the depth that makes it such a powerful story.

Growing up in an Australian country town before World War I, Jackie Hanna and Cushie Moy are carefree and innocent in their love for each other, but Jackie is a dwarf, and his devotion to the beautiful Cushie is condemned by her parents. This is the story of their life-long odyssey, and of the triumph of a special kind of courage. In Swords and Crowns and Rings Ruth Park brilliantly captures the mood and tempo of Australian life from 1907 until 1931.
©1977 Ruth Park (P)2007 Bolinda Publishers Pty Ltd.

"The ever popular Ruth Park has written one of the best novels of the decade" (The Australian)
"Almost impossible to put down... its characters keep on living in the imagination" (Sydney Sun)
"A fairytale of a novel..." (Sydney Morning Herald)

What listeners say about Swords and Crowns and Rings

captures the flavour of the times. characters are alive. I was sorry when I ended. Would love a sequel. but I guess not.

I loved this book! Wonderful characters, will stay with me for a long time, narrator is fantastic! I think this is my best yet!

What a fabulous book and superb narration! I have to rate this as one of my top 5 of all the books I have listened to over the past 6 years! This is an amazing story which has so many Australian characters who are so unique and true to life. I loved the narrator, her ability to create the different characters is to her credit , she certainly made me laugh throughout the Australian country accent. I have told lots of my friends to try audible with this book as their introduction!
Jacqueline