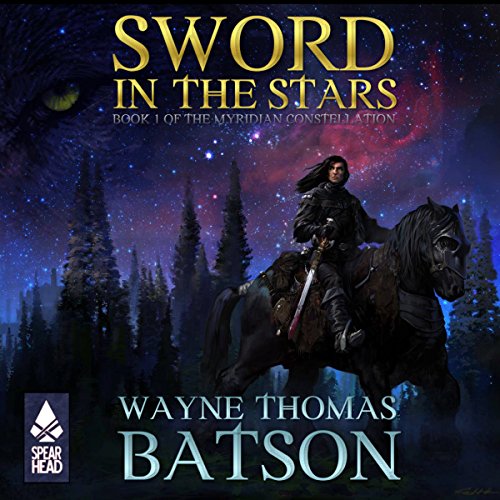 Sword in the Stars

The difference in their uncanny eyes could not be easily discerned. In the rays of the setting sun, both Aravel's and Morlan's eyes appeared gold. In the pale moonlight...yellow. Seemingly the same. Such inscrutable likeness is the way of things with identical twins.

But all who knew the two brothers well noted unmistakable differences, peculiarities more experienced than seen. Those who stood before King Aravel's gaze felt the glad firelight of a cozy inn. But those who fell under Morlan's stare felt the gleam of winter moonlight on the cold, white stone monuments in a boneyard.

From the best-selling author of the Door Within Trilogy comes an epic tale of two powerful kings whose rivalry threatens to tear the world of Myriad apart. Into this chaos of treachery and war strides ex-assassin Alastair Coldhollow, whose quest for redemption leads him to the one foe he cannot defeat with a thrust of his sword. Everything may hinge on an age-old prophecy, but after thousands of years, will the Sword appear in the Stars at last?

With the aid of Abbagael Rivynfleur, a not-so-naive girl from the forest villages, Alastair will tread forgotten roads, face legendary creatures, and meet mysterious new races of people, all in an effort to find Myriad's Halfainin. So begins the sweeping seven-volume Myridian Constellation. Listen to discover what happens when the Sword is in the Stars and the moon is blood red....

What listeners say about Sword in the Stars

The Sword in the Stars by Wayne Thomas Batson is the first book in a Christian allegorical fantasy set in a medieval-like world.

Once an assassin, Alastair Coldhollow has pledged his life to God. He knows his destiny is to call out the Halfainin, a prophesied warrior, and when the Sword appears in the stars, he knows the time is come for the prophecy to be fulfilled. But as the prophecy unfolds (or doesn't?), it isn't as straightforward as he had imagined.

Wow. This book was extremely rich in detail, depth, and planning. It was very well-written, and I loved it, especially because it was an allegory.

Alastair was the main character, but there were many other point-of-view characters and much going on besides his story. The major plot was a war between light and dark, the people of God and the people of the Dark Lord whose desire is death for everyone. There were kings, politics, unique characters, battles, betrayals, redemption, a little bit of romance, prophecies, and much more in the complex, creative world - everything that makes for a great high fantasy. Tying it all together within the battle of light and dark was the prophecy of the Halfainin who would conquer the Dark Lord once and for all. But since this is an allegory, if you know the story of Jesus Christ, you know that the great prophesied warrior-king didn't come in, guns blazing and conquering the world ... at least, not yet. And the way this series captured all of that is one of the things I loved about this story.

Threaded into the story was the theme of redemption. Alastair was a man with an extremely dark past. Obeying the Dark Lord, he led raids to murder entire villages of innocents and became addicted to an extremely addictive, illegal drug. But Alastair found hope in God and left it all behind (though he still struggles sometimes with the drug). However, he isn't certain he can believe that God can redeem him from ALL of it. Some of the leading God-followers don't even believe Alastair can be redeemed of his atrocities. But he puts his hope in the Halfainin and waits for the day he can ask the prophesied warrior in person about forgiveness. (And since we believe the Apostle Paul was forgiven for his evil, Alastair, if he were real, would also be forgiven.)

I read this book as an audiobook. I really enjoyed the narrator, and he did a great job with some of the voices and the inflection.

On the whole, this book was very good. It was definitely dark, though, with a lot of violence and maybe a little too many details about the enemies' horrific evil. I'd recommend it to adults, not teens. But I really enjoyed it for all the reasons I listed above.

I received a complementary copy of this audiobook from the author. I was not compensated for writing a review. All opinions are my own.

loved it. look forward to the next book.

I love this author. glad to find him on audiobooks. look forward to more fun.

My only problem is it is just too dark. I don’t like books to concentrate heavily on the darkness and wickedness.

Enjoyed the story from beginning to end

I loved everything about the book. made me think of Lord of the Rings...well written with engaging and complex characters in an increasingly complicated world.

Clean reading for all ages!

It's hard to find clean reading these days, but this is one you can count on! Great story and one I can recommend to all my friends with teenagers and my own grandchildren. Thank you, Wayne Batson!

This turned out to be a really good book! Admittedly, it was hard to get into and a bit confusing in the beginning, but I pushed though and boy, was it worth it!

It’s definitely worth the credit AND I’m super excited the next two books are already available!

Epic fantasy at its best

Wonderful world building, engaging plot kept me on the edge of my seat (maybe not the best since I was listening while driving), and spine-chilling villains. I'm not sure who I loved more, Alistair or Abigail. Together they were magnificent!
I'm ready for book 2!

Story: This series is a masterpiece of intricate storyline and character development without going overboard on length. These books have a very unique feel to them, but if I had to compare them to anything it would be the Stormlight Archives by Brandon Sanderson. Although each of the books are much shorter than Sandersons', Batson does an awesome job of both plot and character development and had me on the edge of my seat the whole time! Very cool and unique world/races, but it wasn't hard to understand while listening which is nice.

Performance: This narrator is amazing- and that means all the difference for an audiobook. I've had books that I thoroughly enjoyed on paper ruined with bad narration... But Dave Cruse is an absolute master. I will be looking into other books he has narrated!

Extremely well written and absolutely entertaining. You feel very attached to the characters and has good plot twists. Highly recommended!!!!

Good book. A lot to take in but it’s really a great example of Christian fantasy working. Love the Alister characters realness. Fighting with the pain of past sins, trying to make amends but realizing it will take something greater than himself to bridge the gap. On to the next in the series!