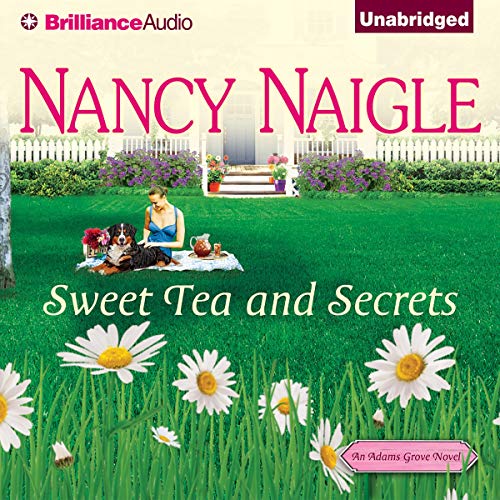 Not much happens in Adams Grove, Virginia, where the worst crime to hit the small town in a decade was hunters bagging too many deer. So when word gets out about a break-in over at Pearl Clemmons’s place, the townsfolk go on high alert, locking their doors and firing up the rumor mill. Pearl’s granddaughter Jill certainly has enough on her plate, what with tending to Pearl’s estate and coming face-to-face with sexier-than-sin Garrett Malloy. Also known as: The Man Who Broke Her Heart. But now that she has to contend with no-count thieves, everyone agrees she can use all the help she can get.

Somebody thinks Pearl had something worth stealing, and it’s clear they’ll stop at nothing to get it - even if it means hurting Jill. Now, with Garrett’s help, Jill just might have a chance of unearthing Pearl’s secrets…as well as her own deep, conflicted desire for her ex. Garrett may have been the last man Jill wanted to see, but now, she may not want to let him go.

What listeners say about Sweet Tea and Secrets

Sweet Country Listen with a Villain or Two

When Jill's Grandma Pearl dies, she feels alone in the world . . . returning to Adams Grove from her fancy job in Savannah, she remembers the simple life of growing up in a small town and all the fun she had growing up. As Jill buries her Grandma, she begins to wonder about her new life in Savannah doing fund raising, going to galas, driving an expensive car, and living in a huge estate . . . with Bradley. Was that really who she was? As the details of Pearl's will are revealed, Jill is faced with choices she hadn't expected . . . but Pearl knew Jill so well . . . could her grandma be right? As each day goes by, the peace and joy of country life seeps down deep into Jill's bones again . . . and the people of Adams Grove, who have always loved her, come to her aide in ways she never expected. I love books like Sweet Tea and Secrets . . . they may not be particularly deep or complex, but they are GOOD . . . in many ways . . . and so refreshing. They restore your faith in mankind. They give you a glimpse into small town life. They show us that GOOD can prevail over evil. I thoroughly enjoyed this listen.

Wonderful book for romance and mystery. A great audio thriller that I enjoyed immensely. Great price $.99 with Audible's price of $1.99 each of the 6 book series.

It’s been a while since I enjoyed a book quite as much as I enjoyed this one! Nancy Naigle has written a sweet romance with a bit of mystery and an old fashioned love story all rolled into one. I’m excited to start the second Adam’s Grove story immediately! The choice of narrative style was perfectly charming.

I really really wanted to love this. Unfortunately, I found Jill’s stupidity too much to overcome. Some have been kinder here in the reviews, calling it naïveté, but it’s just plain stupidity. I have a long list of specifics, but I’m not going to bother putting them here. I gave credit in my rating for the idea of it, but I don’t know if I’ll read any more in the series, which is the most disappointing of all, as I was looking forward to more books. Oh well.

A Sweet Romance in the South

Garrett had given Jill a ring when they were kids. When her Grandmother Pearl dies and leaves everything to both of them, Jill is forced to rethink her future. A second chance maybe the only one they’ll have. Great performance. Recommend.

When TSTL is insufficent!!

I will make this review short and to the point. The narration is overly deadpan. A little emoting would be appreciated. The male characters are rather sweet or not, as is necessary to the story/plot. These stories have a Christian theme except when they don't. Very inconsistent. The female leads are weak, lack a moral compass, and while justifying their actions as "confused" by their stress level DEMAND that the men behave to the highest standards at all time. The mechanics of writing and plot development are above average but the female characterizations drag these stories into mediocrity. Very sad.

Just not my cup of tea.

It wasn't a bad book. It was just a little slow going for me. I dont want to say the heroine was portrayed as juvenile exactly, maybe naive is a better word.

My first book by this author and I'm impressed!

I'm not only impressed with the story, but I loved the narrator! She had the perfect accent for the story and a sweet southern voice!

This storyline strtd out promising, but thn it seemed tht the author couldn't decide if she wanted the book to be a thriller or a cookbook or a sappy love story (without much substance to it) ...it turned out to be a lot of neither. Both lead male characters were very sappy and NOT well developed. If this book hadn't been free I would have asked for my money back!
The narrator was okay but not great with the 'exclaiming ' parts.

Great characters and an engaging story. I really like Ms. Naigle's writing style. The flow is good and so is the pacing. I can't wait to read the other books in this series. They're in KU and you can listen to the audio for free. The narrator is very good. Happy reading!

A very sweet delicious tale with an edge. I got swept away with the story, a great one if you want a light read with a little added substance. Adams Grove is a small country town that everyone knows everyone and and it’s very difficult to keep anything secret. There real heart of the story is Pearl and her granddaughter Jill whose parents left her life in tragic circumstances so Pearl stepped in. All seemed well in the town until the love of her life breaks her heart so she leaves town and with a new man in tow Bradley. Unbeknown to Jill all is not as it seems. Soon things start to unravel until the truth is uncovered and Jill almost loses her life as her eyes open to the truth. She finds out the real reason for the break up with the love of her life and will they ever get back together!!!