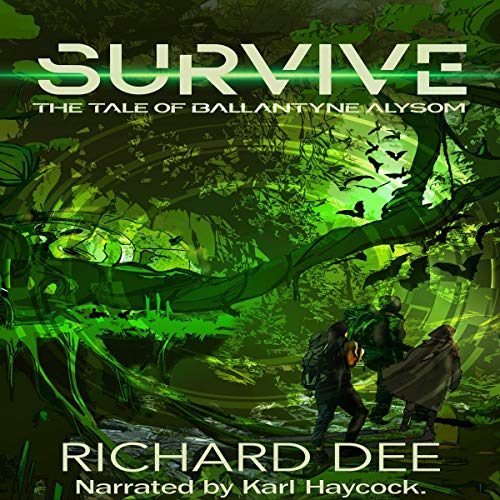 Survive: The Tale of Ballantyne Alysom

If your captain won't keep you safe, who will?

An interplanetary surveying expedition ends in disaster. The survivors are stranded on a beautiful but savage planet.

Making it home will be hard enough, without having to fight each other. Can the truth survive one man's desire to make a name for himself?

Ballantyne Alysom is the galaxy’s most famous explorer. Davis Jansen is the cameraman he takes to record his latest mission. Alysom is giving nothing away, except that it's something that’s never been seen before.

When things go wrong, they are marooned on a savage and uncharted planet. The survivors need a leader they can rely on. Jansen watches and records it all as Alysom’s true character is revealed. He’s not the genial and fearless explorer that everyone sees.

The Far Explorer is a ship riddled with infighting and jealousy, and Alysom is controlling and arrogant, nothing like the man that his reputation suggests. Jansen’s efforts to expose the truth carry just as much risk as surviving on the planet did. Maybe more.

Find out if enough lies can ever bury the truth in Survive, the Tale of Ballantyne Alysom.

What listeners say about Survive: The Tale of Ballantyne Alysom

Story line in intriguing. The accent of the presenter gives a bit of a struggle, although the different accents help. Good job Richard.

Two Tales of Survival in One Brilliant Novel

Part of the genius of Richard Dee is that you’re never really certain what tale he is setting out to tell you. On the surface this is an amazing story of the physical survival of a cameraman and his wife who have the misfortune to sign on to work for a megalomaniac news personality whose arrogance and paranoia endangers his entire crew. And let’s be clear, that story is outstanding and well worth the price of the novel. But it’s not the only story, and therein lies Dee’s brilliance. Because simultaneous to telling us of the disastrous expedition, Dee is also telling the tale of how the survivors attempted to tell people what happened to them—and they find that there are a great many people who will stop at nothing to keep the truth from getting out. Whether he’s depicting a classic struggle for survival on an unexplored planet or the intrigues of supposedly civilized society on earth, Richard Dee has written another intense adventure that will grip you with both hands and not let go until you finish.

Okay I really enjoyed this book.

But this story is SO Frustrating! Seriously, the more you read/listen, the more you want the story to continue. When it does end.. oof

Suspenseful to the end

Battlestar Galactica, you’ve met your match. I always loved space travel and this one fits the bill in someways. Not knowing if you’re going to die today or not it’s front and foremost in these peoples mind, I Recommend this book it’s the kind you can put down till the end and then you’re disappointed when the end happens.