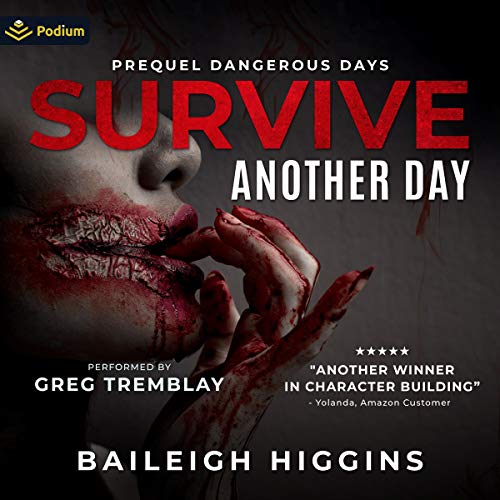 Trapped in bumper-to-bumper traffic, Lilian is caught up in a maelstrom of death when the outbreak hits Johannesburg...a city numbering in the millions.

With no one to rely on but herself, she has to find a way off the bloody streets before it's too late. But with a six-month-old baby and a hysterical toddler in tow, escape seems unlikely.

Battered and abused, Maria looks back upon her life with husband Rolf with loathing. Caught in a prison from which she cannot escape, she's powerless to change her destiny and forever bound to a man she hates. Until the virus grants her an unexpected chance at revenge.

All it takes is one mistake. As the sun sets against the backdrop of the African veldt and living nightmares walk the streets in the shape of their loved one's bodies, humanity's last hope rests in the hands of ordinary men and women called to do extraordinary things.

Survive Another Day is the prequel to Last Another Day, book one of the Dangerous Days series. It delivers eight nerve-wracking stories that will show you how it all began.

What listeners say about Survive Another Day

A series of unrelated short stories cobbled together to form a passable novella, narration was good

I don't know how the virus came about; you just jump into it. The prequel is a series of vignettes. There is a huge cast but so far most of the people are temporary. The reader does a good job and I enjoyed his accents.

This book was slightly scary, it feels like this is really what would happen, should something like this ever come to be. I'm definitely eager to see If there are more to this novella. Henry made me smile, though. the love for his wife made my heart happy.

This is not how we speak in South Africa

All the short stories were set in South Africa, and I am assuming that the narrator was trying his hand at our (I live here) pronunciation of English. Unfortunately he didn't get it right at all which made the characters sound a little daft. But I hung in there anyway. The stories were okay and the narrator's normal narrating voice was good and he had the skill.

Provided great background on the characters

It is a short and quick listen, but it is captivating. A collection of short stories with a select group of characters from the series. I thought it was really interesting to read about the beginning of the apoc for these characters that were introduced a little later in the timeline. It filled up a few gaps that I didn't even notice existed in Book 1, it is worth listening to and understanding a little more about the characters.

Prequel or 1.5, may make a difference!

Here we have a limited time and substance prequel to the Dangerous Days series. The location is South Africa which is different. The reviews criticize Tremblay’s attempt at a South African accent but I wouldn’t know the difference. The outbreak type, origin, or architect? So far, aside from the unique location, this appears to be a standard zombie thriller. Hopefully, the next volume will improve for me. Three.point.five for potential.

I listen to 30-50 hours of audible a week. I am SO acutely aware of how a good narrator can make a meh book and make it good.. Of course in that same vein a bad narrator ruins a good book..
This was a good Zpoc book.. I literally listen to them all.. The narration really next levels this book
This is fairly short. It did leave us curious to see what happens next so we are going onto book one.
I am hopeful that when required to provide a full books worth of substance will the author fall back on that tried and true over descriptive and elongated chapters of dribble OR will he give us more fast past , information and event packed story.
The narrator is good. But not good enough to get through 8 hours of blah blah blah space filling blather

This book is like those movies that start at the end then work their way back. I absolutely HATE those movies! The performance might have been good seeing as how no part of it stood out in a negative way but I was just so frustrated with the story itself for anything else to really stand out for me.

The story was engaging enough, a bit cliche as far as zombie stories goes. The preformance is really what held my attention and will probably be what makes me get the next book.

No Plot, No Story

This was just one long sequence of folks getting bitten by Zombies. No real plot, storyline, or character development. No real substance to sink your teeth into here. And yes, that pun was the best thing to come out of my listening to this book. Narrator was one redeeming aspect.