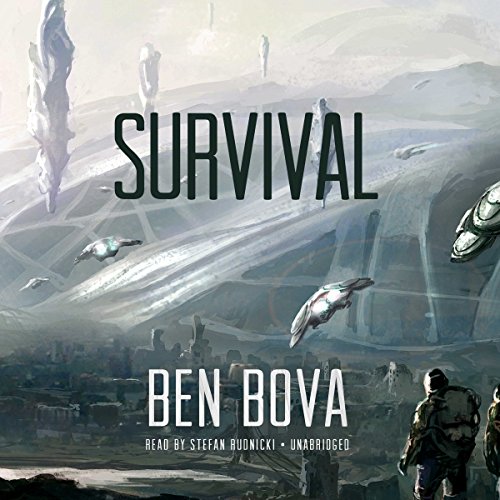 When a human team is sent to scout a few hundred light-years in front of the death wave, it encounters a civilization far in advance of our own, a civilization of machine intelligences.These sentient, intelligent machines have existed for eons and have survived earlier "death waves" - gamma-ray bursts from the core of the galaxy. They are totally self-sufficient, completely certain that the death wave cannot harm them, and utterly uninterested in helping to save other civilizations, whether organic or machine.

But now that the humans have discovered them, they refuse to allow them to leave their planet, reasoning that other humans will inevitably follow if they learn of their existence.

What listeners say about Survival

Excellent Series, Gets Better with Each Book

Ben Bova, winner of 7 Hugos, founding fiction editor of Omni Magazine, and succeeding Editor of Analog, following John Campbell. No one does hard science fiction like Mister Bova. This series concerns attempts to save intelligent life. The characters and the story are very real. My only niggles is... "Why couldn't the book be longer?" I didn't want to leave.

It also show you how to deal with problems with logic and not like an neanderthal.
It was interesting, sometimes you can feel trapped with them.

A great story with perfect narration

Stefan Rudnicki’s narration of Survival is compelling. It is very easy to believe that Professor Alexander Alexadrovich Ignatiev, the elder scholar himself is reading his tale. This facilitates immersion into the story quickly and completely, despite the futuristic setting. The Machines are not given much explanation. They are just as they are perceived by Ignatiev - inscrutable. The “science” is thin, and the ideas and concepts presented by this novel are not difficult; it is the telling of the tale that makes it worth listening to. I loved it as a complete package of interesting plot, believable characterization, and perfect match of the voice narrator with the character providing the narration.

Couldn’t get into it

Others might enjoy this book, but I found it extremely difficult to get into. The exposition felt forced and the conflict too predictable.

it was touch and go for a minute there because as the story progressed I got concerned about the fate of the human population; it was a lovely story.

The last two books of this series felt rushed, they didn't quite have the same pacing as the first book nor the Grand Tour.

Listenable SciFi series. The plot basics center on a radioactive wave of light/energy expanding from the center of the Milky Way core; it will take thousands of years for the wave to reach earth, and protections are implemented. It is up to earthlings to travel the galaxy helping to protect other life forms found. And find them they do!

Although connected via the light wave, the books stand alone in that characters are unique to each story.

Very little Interconnecting, with the other stores.
Yet intriguing story, they way Ben Bova is god at.

amazing end to a series

I had a little difficulty getting started but once I got going I couldn't stop. 😊 as always Ben Bova wrote a thought provoking and beautiful story, and Stefan Rudnicki brought the book to life with perfec t narration.

Bova at his best

Other than it being a little too short it was an excellent listen. recommend it.