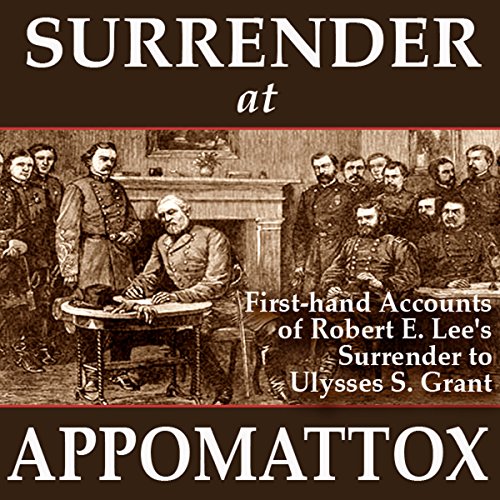 On the 12th of April 1865, the Army of Northern Virginia marched to the field in front of Appomattox Court-House, stacked their arms, folded their colors, and walked off empty handed to find their distant, blighted homes.

These are detailed and moving first-hand accounts from a number of prominent witnesses to Robert E. Lee's surrender of the Army of Northern Virginia at Appomattox. Listen to accounts from:

Brilliantly narrated in Northern and Southern accets by a professional actor and gifted voice talent, this unique audiobook vividly brings to life the words and heartfelt sentiments of those who wrote these riveting accounts.

Also included is the "famous telegram" that informed President Lincoln of Lee's surrender.

What listeners say about Surrender at Appomattox

Appomattox as told by the participants

What did you love best about Surrender at Appomattox?

I enjoyed the first person remembrances by members of both armies. These remembrances were not limited to the commanders but also some of the lesser known players.

What was one of the most memorable moments of Surrender at Appomattox?

James Longstreet telling George Custer that "He'd better get back to his own lines". This occurred when Custer, acting on his own initiative, asked for the surrender of the Army of Northern Virginia.

The interaction between Custer and Longstreet was classic.

The end of "the war" by them that lived it.

Short book but it has a wealth of first person insights to the end of the Civil War. Well worth a listen.

The accounts presented furthered my intrigue with both Lee and Grant. Although quiet different, they both exemplified desirable traits found in honorable military leaders. It seemed very certain they had mutual respect for one another which led to as good a final solution as could have been for a bad situation. Based upon the outcome they forged, it makes one wonder how differently U.S. history would have been had Lincoln lived to take what they did in laying a foundation for rebuilding the Nation.

As a Southerner and fervent student of this period of United States history, I continue to be moved by both the Confederates dedication to fight for what they believed to be a just cause, and the Northern victors compassion and respect for their former foes. It leads me to suggest that only combatants of character can ever attain such a level based upon their mutual experiences.

Having previously listened to Killing Lincoln by Bill O'Reilly, the accounts presented in this work complemented O'Reilly's book and presented many additional details which actually led to a greater appreciation for both works. For those interested in the American Civil War, with all the volumes written about the War, accounts such as this provide a fitting closure.

What made the experience of listening to Surrender at Appomattox the most enjoyable?

I like to hear stories from multiple viewpoints. Armies and battles are very complex; no one has the whole truth.

The presentation of different vantage points.

Did Andrew Mulcare do a good job differentiating all the characters? How?

The audio quality was not up to usual audible standards.