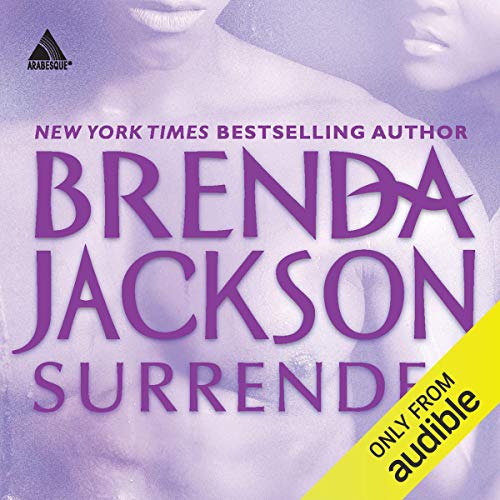 After a childhood spent moving from army base to army base, independent-minded Nettie Brooms is determined to secure a stable life - and never become involved with a military man. Then she meets incredibly handsome and charming Ashton Sinclair, a dedicated colonel in the U.S. Marines who's intent on capturing her heart - no matter what it takes. Now Nettie's wondering how a man she swore she would avoid could so easily test her resolve by igniting an irresistible passion she can't walk away from.

What listeners say about Surrender

What made the experience of listening to Surrender the most enjoyable?

This is Brenda Jackson at her finest,

What was one of the most memorable moments of Surrender?

When Nettie surrendered her love to Ashton.

All of them were awesome.

I have read hundreds of romance novels and this one,along with some of Brenda Jackson's other books,is in my top ten all time favorite romance books.

What made the experience of listening to Surrender the most enjoyable?

If you want to read about REAL Romance, Love and Honorable and Protective Men you must read Brenda Jackson Books. Especially Surrender and Thorns Challenge, both are my all time favorites. I have both in audible and paperback.
I wasn't to happy with the performance in Surrender but the Story makes up for the narrator's short coming.
Keep them coming Mrs. Jackson!!

Ashton of course was my favorite. He's sexy, strong, protective and loves his woman unconditionally

What did you love best about Surrender?

What's not to love. A strong minded man who went after what he wants a nettie was it.

What was one of the most memorable moments of Surrender?

Deep not bad to listen to

I had a lot of awwww moments.

The narrator needs to STOP!!

Pete Ohms is a terrible narrator!!! he sounds like Captain Kirk!! The obvious pause he does in between every other work is killing me!!! I am unable to listen to ANY book that he narrates.

This was my first romance novel, and I'm hooked!! Started listening and couldn't stop until it was over. I will definitely listen to the entire series. Well Done.

Loved the story. Loved it when I read it and loved it more listening to it. The narrator did an awesome job reading the story. Mesmerizing!

I could listen to this story over and over!

The characters and the plot of the story were so life-like. It was just enough suspense mixed into the romance. Terrific ending.

Not as good as others

This book was just okay to me. I'm a Jackson fan, but this one was sort of unrealistic. The narrator was as expected... Not my favorite.

Wanted to like it more (said with a raised brow)

What would have made Surrender better?

The phrase "lifted/raised a brow" occurred 44 times in the book. 44 times. Yes, I counted when it started getting comical. We get it. Many unbelievable things created high eyebrows. Maybe if I he story was actually believable....

Has Surrender turned you off from other books in this genre?

Yes. I'm done with Brenda Jackson. Why do all of the characters have multiple names? Too confusing to keep the extraneous characters straight. Also, the overlapping stories were majorly unbelievable.

Where do I start? The volume was all over the place. The whispered parts were unintelligible so I turned up the volume only to be blasted out unexpectedly. Was that a narrator problem or audio engineer issue? Truly a problem. Also, why did Sinclair's character have such a halting, creepy cadence? No one else did. Was it to make him sound "ethic?" Wrong on so many levels. Not my favorite narrator.

If you could play editor, what scene or scenes would you have cut from Surrender?

Kidnapping scene to Oklahoma reservation was too strange and did not suit the characters at all. Why couldn't all that have happened on the planned trip to New Orleans? The book needed a serious editor to be the voice of reason and to cut the fluff. Seriously. Some characters have five names. Give me a break.

We enjoyed the book, but didn't care for the way that Mr. Ohms told the story.