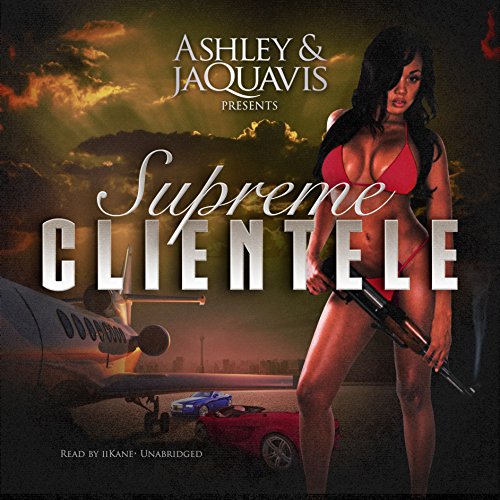 By: Ashley & JaQuavis
Narrated by: iiKane
Free with 30-day trial

Every hustler's reign ends in one of two ways: prison or death. Refusing to let that prediction become a reality, Julius "Jules" Carter creates new rules to an old game. Strategically, he forms one of the most notorious drug operations Harlem has ever seen. Jules thinks the game is his biggest challenge - until he meets Tish.

Young and ambitious, Tish is determined to escape from Harlem's allure, but her love for Jules has her rooted. It isn't long before she's tangled in Julius' web of lies and deceit. When she finds out about his past demons and connects them with her own, she discovers that there's a thin line between love and hate.

You can't turn a bad girl good, and once a good girl turns bad she's gone forever. Julius finds out the hard way that everything done in the dark eventually comes to light.

What listeners say about Supreme Clientele

cannot wait to read the next installment. But the summary doesnt go with the story so it will throw you off. The cchick in the summary wasnt even in the story?!

This was a great book. I love when this narrator reads she makes it sounds like a movie 👍🏾👍🏾👍🏾👍🏾

Hi my name is Ju, I love Ashley & Jaquavis books.
However this particular book the person whom is reading it is reading it too fast and sounds as if the person is reading off of a waterfall makes me un-interested and just want to read the hard copy please fix.

Story is great but the narration is HORRIBLE!!!

I love A&J books and was so pleased when so many were available at once but when I saw that iiKane was the narrator for most I almost cried. She is the worst. Audible please stop using her! I helped myself by slowing her down to .75x and she was then at least bearable.

I loved this book! I'm a huge fan of Ashley and Jaquavis. I listen to this audible book straight while at work and it kept my full attention the whole time. Glad to actually listen to one of their books with a happy ending. 5 stars🔥🔥🔥🔥

I was very happy to have a great ending. The female characters suffered enough.

This was a great read. I enjoyed the twists and turns. I’m mad I am listening to the books backwards, but nevertheless its well worth it because now I know how things started .

This book is really good but Ziah is so naive! It’s super annoying. Like why leave out important information. She makes sooo many dumb decisions. On top of that what was with the 5min of storytelling of what all was happening new in their lives. It sounded like the end of a movie and it was the middle of the book. Weird. Overall great story.

Kept me on edge