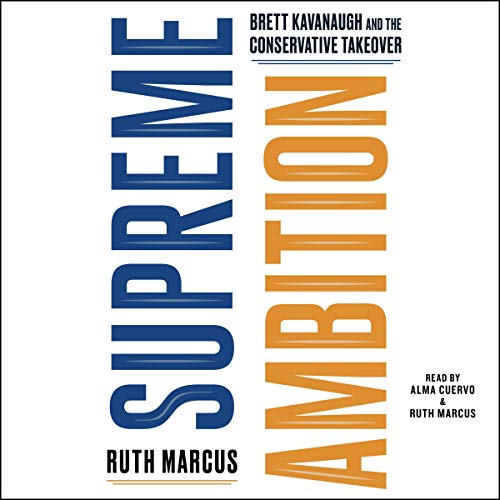 The Washington Post journalist and legal expert Ruth Marcus goes behind the scenes to document the inside story of the Brett Kavanaugh confirmation battle and the Republican plot to take over the Supreme Court - 30 years in the making - in this “impressively reported, highly insightful, and rollicking good read” (The New York Times Book Review).

In the summer of 2018 the drama unfolded so fast it seemed to come out of nowhere. With the power of the #MeToo movement behind her, a terrified but composed Christine Blasey Ford walked into a Senate hearing room to accuse Kavanaugh of sexual assault. This unleashed unprecedented fury from a Supreme Court nominee who accused Democrats of a “calculated and orchestrated political hit”. But behind this showdown was a much bigger one. The Washington Post journalist and legal expert Ruth Marcus documents the 30-year mission by conservatives to win a majority on the Supreme Court and the lifelong ambition of Brett Kavanaugh to secure his place in that victory.

The reporting in Supreme Ambition is full of revealing and weighty headlines, as Marcus answers the most pressing questions surrounding this historical moment: How did Kavanaugh get the nomination? Was Blasey Ford’s testimony credible? What does his confirmation mean for the future of the court? Were the Democrats outgunned from the start? On the way, she uncovers secret White House meetings, intense lobbying efforts, private confrontations on Capitol Hill, and lives forever upended on both coasts.

This “extraordinarily detailed” (The Washington Post) pause resister traces how Brett Kavanaugh deftly maneuvered to become the nominee and how he quashed resistance from Republicans and from a president reluctant to reward a George W. Bush loyalist. It shows a Republican party that had concluded Kavanaugh was too big to fail, with senators and the FBI ignoring potentially devastating evidence against him. And it paints a picture of Democratic leaders unwilling to engage in the no-holds-barred partisan warfare that might have defeated the nominee. In the tradition of The Brethren and The Power Broker, Supreme Ambition is the definitive account of a pivotal moment in modern history, one that will shape the judicial system of America for generations to come.

What listeners say about Supreme Ambition

The book is well written and meticulously researched. The book is based on the enormous amount of material including thousands of pages of Kavanaugh’s emails and also includes over three hundred interviews. The author points out, among other things, that the goal of a few powerful donors to the GOP is to pack all federal courts with conservative judges. The goal is to deregulate businesses in the area of labor laws, consumer protection laws, banking regulations as well as environmental laws. She points out the key big donors are using the social issues such as abortion as a cover for their main goal of deregulation of industry. The author provides information showing that Gorsuch and Kavanaugh are ruling in favor of reducing regulations on businesses. Marcus discusses the rivalries and enmities involved in the Confirmation Hearings. She also covers what Marcus calls the “Feinstein mismanagement of Christine Blasey Ford’s case”. Marcus also takes the democrats to task. The book appears primarily unbiased, but Marcus does come across as unsympathetic to the GOP’s endeavor to pack the Court. Marcus takes both parties to task for extreme partisanship rather than the welfare of the country. I recommend this book.

Marcus is a graduate of Yale University and Harvard Law School. She is a veteran journalist with the Washington Post. She was a finalist for the 2007 Pulitzer Prize in Commentary.

The book is sixteen hours and one minute. Alma Cuervo does a good job narrating the book. Cuervo is an actress and well-known audiobook narrator.

The author is definitely against Kavanaugh's election. In some places she editorializes. However, the insights provided and the narrative are well worth a reader's time.

Ruth Marcus is a good reporter but her narrative is a dry recitation of facts. Good reporter, not the best author.

A fair and deeply-sourced look into the Kavanaugh selection and confirmation, this is a must-read. I couldn’t stop listening.

Another piece of trash by this author. But it’s my fault I bought it knowing the last one was Also not very good Last and least. If you still think Chris Ford is a good witness? Try reading law school for all of us. Eh bub ?