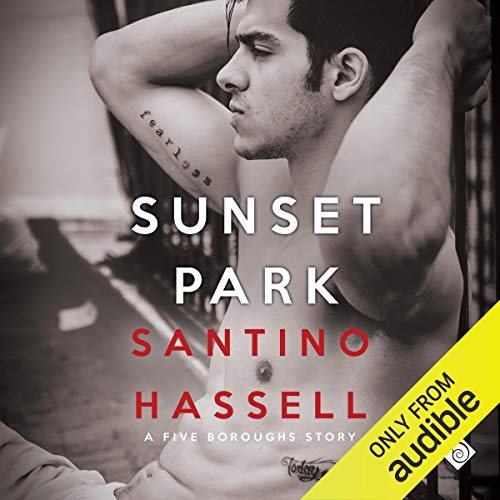 Raymond Rodriguez's days of shoving responsibility to the wayside are over. His older brother wants to live with his boyfriend, so Raymond has to get his act together and find a place of his own. But when out-and-proud David Butler offers to be his roommate, Raymond agrees for reasons other than needing a place to crash.

David is Raymond's opposite in almost every way - he's Connecticut prim and proper while Raymond is a sarcastic longshoreman from Queens - but their friendship is solid. Their closeness surprises everyone as does their not-so-playful flirtation, since Raymond has always kept his bi-curious side a secret.

Once they're under the same roof, flirting turns physical, and soon their easy camaraderie is in danger of being lost to frustrating sexual tension and the stark cultural differences that set them apart. Now Raymond not only has to commit to his new independence, he has to commit to his feelings for David or risk losing him for good.

What listeners say about Sunset Park

There are a lot of positive reviews for Sunset Park here, so I'm not going to rehash the story. The story and the writing are excellent, okay? Even when I wanted to throttle the characters (which was pretty much the whole story), I was still engaged wanting to know what happens next. What I'm going to focus on here is the audio.

Michael Ferraiuolo hits a home run with the narration. Period. He nails this. Pure and simple - he absolutely took two pretty unlikable characters and not only made them interesting, he made them *fascinating*. I cancelled a date to keep listening to this audio book. Sure, a good part of that is Hassell's writing, but Ferraiuolo takes it not only to another level, but a whole other universe.

Ferraiuolo joins that distinguished group of narrators. He absolutely blew me away with his pacing, his timing, his sublime character voices...this is excellent narration.

David and Raymond are my romance heroes! Their story is incredible. I actually caught myself yelling at the characters lol. Beautifully written. And let's talk about the narrator.... Human hubba.. What a voice. THIS IS A MUST READ.

I kept thinking that there were two narrators in the story. very good distinction between the characters. The story was very entertaining and worth a buy.

A great read once you get into it

What other book might you compare Sunset Park to and why?

Did Michael Ferraiuolo do a good job differentiating all the characters? How?

He was slow ro start, and I had just listened to Sutphin Boulevard, and really like the narration by Rusty Topsfield. Ray's voice is completely different. I had to wonder why the change in narrators. Once he got going the voices of the characters got better.

One of my favorite books ever. Took me a few minutes to get used to the narrator but he did a wonderful job.

Fantastic lineup of Narrator and Story

Would you consider the audio edition of Sunset Park to be better than the print version?

Yes actually, Michael Ferraiuolo brought the characters to life. His voice for Raymond was so enjoyable it curled my toes! He should do more NY accents - he is spot on. His voice for David was also enjoyable and you could clearly denote which character was talking. I can't praise Mr. Ferraiuolo enough. He is right up there with Sean Crisden and Greg Tremblay.

Raymond - I could listen to him all day. He is so sweet, so human, so confused - he tries so hard to do the right thing.

Have you listened to any of Michael Ferraiuolo’s other performances before? How does this one compare?

Yes, I seek him out for narration but when he does a NY accent he just excels. Maybe I just have a soft spot for the accent itself but it certainly is pertinent to this story and so enjoyable. Its a shame he didn't get to narrate the first story of the series (the narrator for that one was absolutely awful).

If you could rename Sunset Park, what would you call it?

Again, the story was great and the narrator made it an even better experience. Can't wait to listen to it again (and again...). Kudos to those who chose Mr. Ferraiuolo.

dislike of this story is David's constant whiny whiny overthinking being too kind going back to the ex as a comfort zone character. I loved Raymond for his tough Puerto Rican Yankee character. The only reason why I got this book is because of the narration but Michael did a good job because he always does give him a bad novel and he can make it sound so good.

This is the second book in Hassell’s “Five Boroughs” series. I loved the first, “Sunset Park,” and this is just as good. “Sutphin Boulevard.” You don't need to read the first but the link to Michael and Nunzio from the first come into this in secondary roles even though important. The story derives from two blue-collar boys admitting a longtime love for each other and looks into the issues of class and ethnicity through sexuality. Best new writer of this genre in decades. Michael Ferraiuoli's narration is spot on. A must listen audiobook!

I loved everything about this.

-Complex characters
-Angst
-Sexy
-Friends to lovers
-Relatable characters
-Raw/edgy writing
-And a narration that brought this story and it's characters to life.

5 Buy and Listen to this Now Stars!

Everything in this book brings out all the love I have inside. Such a wonderful story written extremely well and the narration is so perfect-- between Santina Hassel and Michael Ferraiuolo I am so darn happy-- beautiful work guys ♥️