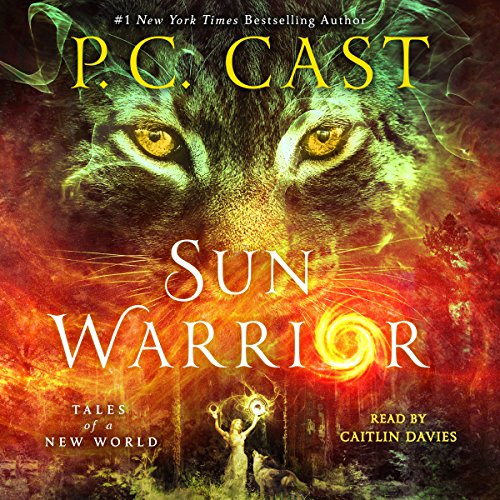 Number one New York Times best-selling author of the House of Night series, P. C. Cast, presents Sun Warrior, an epic fantasy audiobook set in a world where humans, their animal allies, and the earth itself has been drastically changed. A world filled with beauty and danger and cruelty....

The battle lines have been drawn, and Mari, an Earth Walker, and Nik, a Companion, who were once from rival clans now find themselves fighting to save each other and their people from destruction.

Thaddeus betrayed his own people, killing Nik's father and destroying their entire clan. But he wants more. He wants the power he believes Mari has stolen from him and his people, and he will do anything he must to get them back, even if it means destroying everything in his path. There is only way to stop Thaddeus, but it means a harrowing journey for Mari and Nik into the heart of darkness. Meanwhile, Dead Eye becomes a willing vessel for the newly awakened god, Death. Death has plans of his own, and he, too, will use whatever and whomever he must, including the mad Thaddeus.

Listeners will fall in love with both the mythic scope and the thoughtful characterizations in this powerful audiobook adventure!

What listeners say about Sun Warrior

I am a little disappointed that I cant find the wind riders 3rd book to this set as an audio book, I have however found it as an ebook and will read it for sure.
The Sun Worrior is absolutely amazing as was the first book.
I love P.c Cast and was very happy to see that Caitlin Davies was reading this as well as I listened to The House of Night and fell in love with her aswell, Caitlin has such a talent for reading.

She is always writing with strong female leads that don't back down. I love every single book she's ever written.
I also love the narrator.

I love P.C. Cast and this book series is just as amazing as her Marked series! I can't wait to hear book 3! If you are a P.C. Cast and Kristin Cast fan you will devour this series. I'm also a fan of Caitlin Davies the reader she does amazing voices and makes you feel like your inside the story being told!

An entertaining tale that I wished was part of a trilogy.

Yet another wonderful piece of work by PC Cast and beautifully read by Caitlin Davies. I just love everything I have read by Cast. Just wonderful!!!

This series just keeps getting better and better. If you like action adventure fantasy with magic and animals, then this is a must read.

I truly enjoyed this series. it's full of action and a cute love story. I can't wait the next book is released in October. the book ended with a cliff hanger.

I loved Moon chosen and Sun Warrior was just as masterful and I could not put it down till the end. Eagerly awaiting the next book in the series.

I enjoyed this story and the performance. I can't wait for the next book to come out.

LOVE LOVE LOVE LOVE! once again PC will have you at the edge of your seat through the whole book! FANTASTIC! bad ass!! story!!

I loved this series from book one, I have all 3 hardback books in my own collection at home and couldn't wait to read them again but found it difficult. Since we got Audible I've fallen in love with books all over again

A fantastic and gripping story. The characters are believable and make you care about them. I can't wait for the next one!

didn't think the second could be better than the first book but i truly adored it! cannot wait to see what happens to antreas and Bast