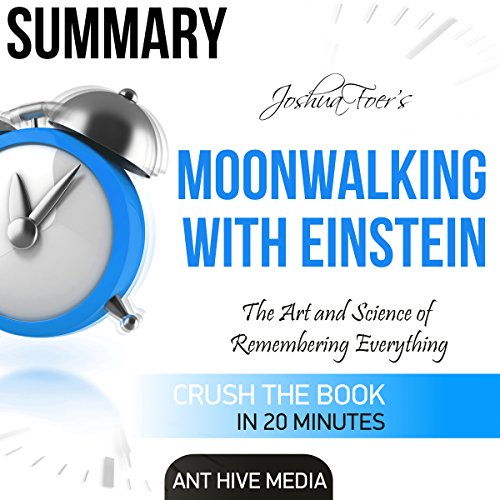 Summary of Joshua Foer's Moonwalking with Einstein: The Art and Science of Remembering Everything

This is a summary of Joshua Foer's Moonwalking with Einstein The Art and Science of Remembering Everything. Foer's unlikely journey from chronically forgetful science journalist to US Memory Champion frames a revelatory exploration of the vast, hidden impact of memory on every aspect of our lives. On average, people squander 40 days annually compensating for things they've forgotten. Joshua Foer used to be one of those people. But after a year of memory training, he found himself in the finals of the US Memory Championship. Even more important, Foer found a vital truth we too often forget: In every way that matters, we are the sum of our memories. Moonwalking with Einstein draws on cutting-edge research, a surprising cultural history of memory, and venerable tricks of the mentalist's trade to transform our understanding of human remembering. Under the tutelage of top "mental athletes", he learns ancient techniques once employed by Cicero to memorize his speeches and by medieval scholars to memorize entire books. Using methods that have been largely forgotten, Foer discovers that we can all dramatically improve our memories. Immersing himself obsessively in a quirky subculture of competitive memorizers, Foer learns to apply techniques that call on imagination as much as determination - showing that memorization can be anything but rote. From the PAO system, which converts numbers into lurid images, to the memory palace, in which memories are stored in the rooms of imaginary structures, Foer's experience shows that the World Memory Championships are less a test of memory than of perseverance and creativity.

Foer takes his inquiry well beyond the arena of mental athletes - across the country and deep into his own mind. In San Diego, he meets an affable old man with one of the most severe case of amnesia on record, where he learns that memory is at once more elusive and more reliable than we might think. In Salt Lake City, he swaps secrets with a savant who claims to have memorized more than 9,000 books. At a high school in the South Bronx, he finds a history teacher using 2500-year-old memory techniques to give his students an edge in the state Regents exam.

At a time when electronic devices have all but rendered our individual memories obsolete, Foer's bid to resurrect the forgotten art of remembering becomes an urgent quest. Moonwalking with Einstein brings Joshua Foer to the apex of the US Memory Championship and listeners to a profound appreciation of a gift we all possess but that too often slips our minds.

This summary is aimed for those who want to capture the gist of the book but don't have the current time to devour all of it. You get the main summary along with all of the benefits and lessons the actual book has to offer. This summary is not intended to be used without reference to the original book.

What listeners say about Summary of Joshua Foer's Moonwalking with Einstein: The Art and Science of Remembering Everything

Narration: sufficiently clear. Would be boring if much longer as narrator speaks in monotone voice.

Content: mostly familiar to those having even only rudimentary understanding of memory. However some new historical anecdotes of interest. Surprised me that Socrates disparaged reading, for instance.

Overall, worth a listen and motivates me to buy unabridged audio.

Having read the book and wanting a short cut to recall salient points, this was too concise.
I wondered what people who had not read the book will think about the audio presentation.