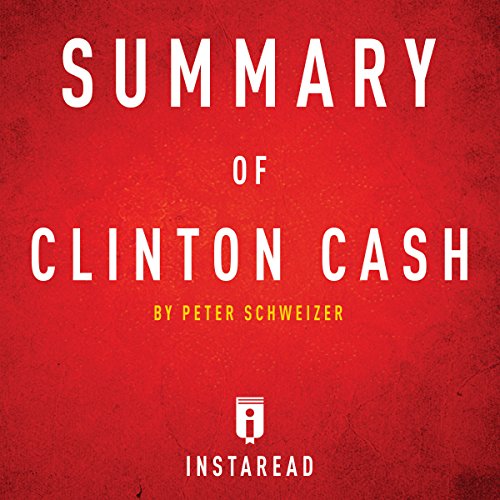 By: Instaread
Narrated by: Sam Scholl

Peter Schweizer's Clinton Cash: The Untold Story of How and Why Foreign Governments and Businesses Helped Make Bill and Hillary Rich is an exposé of the business dealings of Bill and Hillary Clinton between 2001 and 2015. The Clintons and their foundation have both been enriched by money from dubious sources. The payments the Clintons received as speaking fees and the funds they accepted as donations to the Clinton Foundation may have led Hillary to alter US policy when she served as senator and secretary of state. This pattern of possible corruption should be investigated by law enforcement.

Bill was governor of Arkansas from 1978 to 1981 and from 1983 to 1992. While Arkansas governor, he and his wife were involved in suspicious financial and real estate dealings involving the Whitewater Corporation, in a foreshadowing of later ethical questions. Others connected to the deal were prosecuted and convicted, but no charges were ever brought against the Clintons.

PLEASE NOTE: This is key takeaways and analysis of the book and NOT the original book.

Inside this Instaread Summary of Clinton Cash:

What listeners say about Summary of Clinton Cash: by Peter Schweizer

very good, great talking points, to the point. recommend this to those who want to learn dirt on the Clinton's