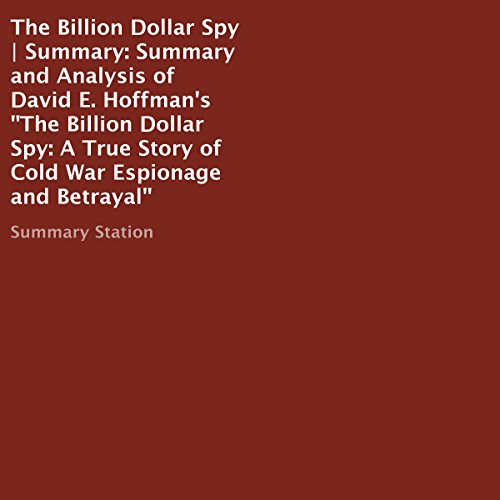 Summary and Analysis of David E. Hoffman's The Billion Dollar Spy: A True Story of Cold War Espionage and Betrayal

Learn about America's most valuable spy in a fraction of the time it takes to listen to the actual book!

Hoffman's look into the story of Tolkachev, the billion-dollar spy, is exciting and thrilling, while also being a tragic, emotional roller coaster. Hoffman presents the events in such a way that raises the stakes of each operation to its peak. Every meeting, whether between Tolkachev or another of the spies featured in the book, is supplemented by the exact right amount of background information; not so much that it becomes boring, but enough to know just how much danger everybody is in. The inclusion of background details about each person creates palpable emotional attachment when things start going wrong. Hoffman's write-up of these events reminds us that the people of the CIA and the citizens of the Soviet Union, even KGB officers, are all real people striving for what they believe is good and right.

What listeners say about Summary and Analysis of David E. Hoffman's The Billion Dollar Spy: A True Story of Cold War Espionage and Betrayal