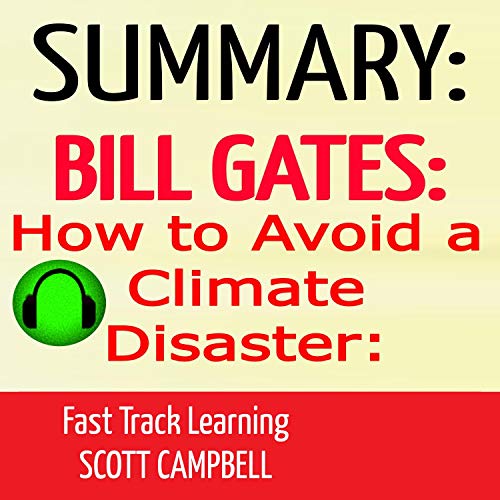 Summary: Bill Gates: How to Avoid a Climate Disaster

Bill Gates wants the listener to remember two key numbers regarding climate change. The first is 51 billion. The second is zero. Fifty-one billion is how many tons of greenhouse gases the world typically adds to the atmosphere every year. Although the figure may fluctuate annually, it most often increases. Zero greenhouse gases are what we need to dodge the worst effects of climate change. Humans need to brain up and cease pumping greenhouse gases into their surroundings. Although challenging because of scale - a grander endeavor has never before been attempted - if most countries can change their ways, we have a shot at avoiding some catastrophes.

Manufacturing, farming, traveling, and just about every other life activity in modern times is associated with spewing out greenhouse gases. As the global population expands, especially in India and China, so will the modern lifestyle, and so will harmful gases.

Bill Gates reveals his optimism right out of the gate. He points out that we already employ some of the tools we will need, and that we can make the rest - that it’s not magic. We can make the right choices for consuming energy and foods. With a concerted and world effort on a timely basis, we can put a damper on greenhouse gas expansion.

Bill Gate’s compelling book informs us about why he believes we can achieve this and what it might entail. Through his Foundation, Gates shows that he became quite familiar with technology, education, general development, including energy, and global health.

Gates embedded himself in climate change issues as a result of his interest and actions involving the inadequate distribution of energy in poor countries. Beginning around 2000, Gates visited South Asia and sub-Saharan Africa to study the major challenges like HIV, malaria, and child mortality. Gates realized that energy revealed itself as scarce when he gazed out of the windows on his flights at night and spied few lights surrounding even the largest cities.

This is a summary audiobook and complements Bill Gates’ new book, not replace it.

What listeners say about Summary: Bill Gates: How to Avoid a Climate Disaster