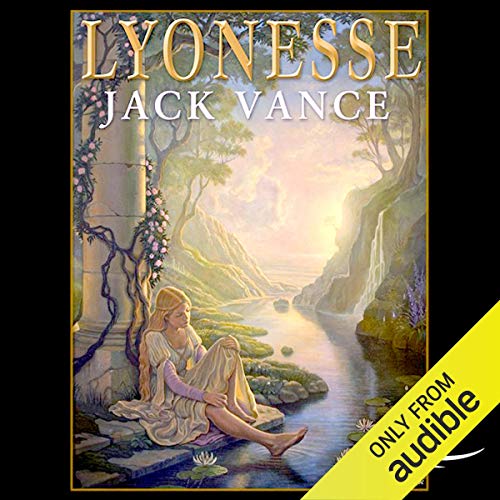 The Elder Isles, located in what is now the Bay of Biscay off the coast of Old Gaul, are made up of 10 contending kingdoms, all vying with each other for control. At the centre of much of the intrigue is Casmir, the ruthless and ambitious king of Lyonnesse. His beautiful but otherworldly daughter, Suldrun, is part of his plans. He intends to cement an alliance or two by marrying her well. But Suldrun is as determined as he and defies him. Casmir coldly confines her to the overgrown garden that she loves to frequent, and it is here that meets her love and her tragedy unfolds. Political intrigue, magic, war, adventure and romance are interwoven in a rich and sweeping tale set in a brilliantly realized fabled land.

“(Vance) gives you glimpses of entire worlds with just perfectly turned language. If he’d been born south of the border, he’d be up for a Nobel Prize.” (Dan Simmons)
“Vance has the narrative force, the willingness to look very coldly at violence and cruelty, to not shy away…. He has an amazing ear and writes a beautiful sentence.” (Michael Chabon)

What listeners say about Suldrun’s Garden

I've only read one book by Jack Vance - The Dying Earth - and that was only a few months back. I enjoyed it so I gave this audio book a try. I'm glad I did. I wasn't sure where it was going at first and thought it was going to be a story about a little girl but the tale grew and grew and I really enjoyed it. I do like a good tale set in the world of faerie.

I enjoyed the narration and thought it suited the story well although there were one or two noticeable changes in timbre. But those went unnoticed after a couple of seconds. Other than that I was totally engrossed and really glad I purchased this story.

sorry but the narrator made me return the book

A great fantasy with interesting characters.<br />

Enjoyed thoroughly. Good narration. Could have done with a cribsheet of names though! It's harder for me to remember who is who without the written word!

I am 65 years old.When I was about 13 I discovered science Fiction outside of comic books.It was a novelette in GALAXY Science Fiction magazine by Jack Vance entitled THE DRAGON MASTERS which had just won the Hugo and [I think] Nebula awards.
I was hooked on both Jack Vance and Science Fiction.To this day Jack Vance is one of my favorites.WORDSMITH comes to mind.Not only does he create worlds,characters,civilizations and concepts as good as any of the genre,he's different.No Sci-Fi/Fantasy author writes quite like Vance.Lyonesse is of course fantasy.It's kind of like reading a Grimm's Faerie tale/Lord of the Rings with a touch of Edgar Allen Poe and a dash of H.P.Lovecraft.This is his most ambitious work and it does not disappoint .However don't rule out reading his other books.I suggest you start with THE DRAGON MASTERS.

Jack Vance is a great author, and helped create the fantasy genre with his Dying Earth series. This was written in his later period, and it is rich with both noble and mendacious characters and meandering, cynical digressions which can either drive you crazy or laugh with delight. With my 5 star rating you can safely count me in the later group.

Suldren's Garden is the first of the Lyonesse trilogy, & it takes a little while to get going. Stay with it, and by the end of the book, you can' wait for the next one.

I had a hard time listening to this narrator and couldn't get through the first chapter.

A masterpiece by a master

Vance was a master storyteller, and this is one of the best stories he told. It is filled with fairies, magicians, knights, villains, kings, war, love, hate, birth, death, anguish and triumph. Mix The Count of Monte Cristo with Grimm's Fairy Tales and you have some of the flavor of the book.

Vance's language is lackadaisically descriptive, and he takes his time to build situations and events, but once the stage is set the play that follows will have you on the edge of your seat.

This is a great introduction to Vance.

Jack Vance is perhaps one of the most talented American writers of the 20th century. Suldrun&#8217;s Garden is a modern day Grimm&#8217;s fair tale. The characters are rich; the story is convoluted and interposed on numerous levels. Kevin Collins does a wonderful job bring to life those characters.

I had read this novel in print back sometime in the 90's and remembered it very well. I remembered also thinking that the first book started out slow and was almost insufferably tragic. But too, I also remembered that the story really took off and held me in thrall from about the last third of this first book and through also the second and third. I give the story itself only four stars only because I must reserve a five-star rating for certain other of Jack Vance's works (sadly none of his SF seems to be yet available as audiobooks).

In comparison to Jack Vance, I'd have to give almost any of Tolkien's works, and very particularly The Hobbit only a three or even a two-star rating. Why? Because in all of Tolkien's works the reader can almost always be certain that just when the going gets really hard for the hero, some wizard will just pop in out of nowhere to save the day, send a flock of eagles, or something. Vance never makes it so easy for any protagonist of his. Mainly they have to solve heir own problems.

Also I like for the female characters to have important roles. In much of Jack Vance's SF this is not so much the case (being written in the early 60's) but he does so in his later novels,of which this is one. The Elder Isles being an ancient, patriarchal society, their roles are suppressed. But still Jack allows for some to shine through, especially in the last book, Madouc.

Lastly let me praise this whole series for being extremely well read. The narrator could not have done better. As for the story itself...

Herein begins the Lyonesse Trilogy, a tale of greed, tragedy and revenge such as only Jack Vance could ever have written. It begins a bit slowly in the first chapter by setting the scene of the overall background, narrating the history of the Elder Isles in a way that I generally only skim over lightly when reading a book in print. Jack Vance does this, principally, to set the mood and motivations for certain of the characters, namely Suldren's father, the king. Just let those bits wash over you as there is no need to memorize any details. While the principal movers and shakers of this world of Vance's creation may be the kings and their machinations, the principal characters of the story are more the sort that any reader can personally identify with. Nevertheless, Jack Vance gives full characterization to all, so that the motivations of each make sense within their separate contexts. It is a full bodied story and doesn't take on the greater part of its overall scope until very nearly the end of this, the first book of three.

I'm sure the reader will enjoy this whole series, however apparently slow might be the beginning. From about a quarter of the way into the second book it will have become very clear that the first could not have been in any wise different. It serves as the foundation for what will forever be a timeless classic.

Vance at the height of his powers!

An old favorite (the complete trilogy is a must) enhanced by the talents of a wonderful reader, actor, storyteller. I doubt that many people would ever say that the Lyonesse tale is less than extremely appealing.

Not sure what the complaints about the narrator are all about. I found him to be a fine talent and enjoyed the performance a great deal. I loved the writing and the form in which the story was told. Vance is a master.

I bought this book on audible because it came recommended as one of the greatest fantasy books of all time. I don't understand why it gets that recommendation. I didn't like the way that characters in this book have little meaningful interaction. In fact, when the author mannages to finally get his two main characters together (spending half of the book to get there), he skips over interraction and then immediately zooms ahead in time. Maybe some people love lots of description, but I prefer reading of human connection. So this book is not for me. I moved on to some LLoyd Alexander instead, and was much more satisfied.

At first I didn't like it, so many words, so little action. But I warmed up to the bits of folklore and myth recast; gave it a familiar feel, even if not historically grounded. I do appreciate that Collins' reading is so clear that one can speed it up to a 7 hour listen. It has elements that make it iffy for younger readers, including complex plot elements that are very connected to adult life. On the other hand, minimal inner mental debate about reality does make the story easier to follow. That said, the next two books are not beckoning me very strongly.

Ruined by the narrator

Great story, appalling narration. They could at least have found someone whose pronunciation matched a known language.

Great characters, a wonderful world, would recommend to any who care to listen! Jack Vance is always a good read.

It's wonderful to listen to this story when driving for a long time. The speaker is really good for a while you are in the Jack Vance' universe...