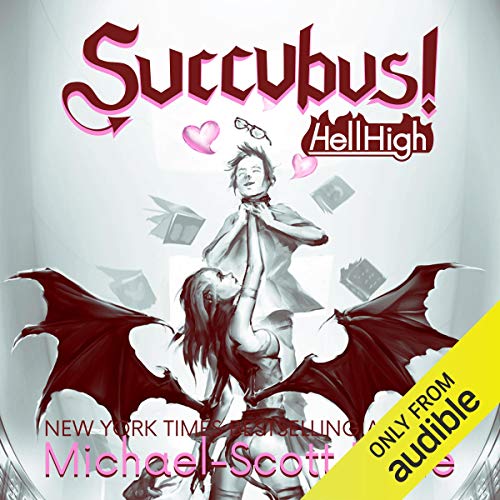 Sherman had always thought high school was a real drag. He was looking forward to finishing his senior year so that he could coast through college, get a day job, and spend the rest of his life playing video games.

He is used to seeing angels, but when a new girl transfers into his AP physics class, he thinks demons might be more his style.

When his innocent crush leads him to the basement, he finds out that his school is exactly the kind of hellhole he always thought it was; only now he'll be lucky to escape before they eat his soul.

wow this is entertaining! one nerdy guy that no one can remember well and lots of mythological monster action. some violence and no adult content. I was cracking up over the way Sherman looks at things. short but a great way to distract yourself

An unexpected but good surprise

I picked up this book as something quick to listen to between two larger audio books. I figured I would listen a few minutes at a time, but I just ended up listening to the whole thing. I think I picked it up for under $5 and it was worth the risk.

The story itself centers on a senior in high school and the things he sees in that high school. The story involves monsters, demons, devils and a hot succubus girl. I will admit, about 10 minutes into the story I was hooked and found myself enjoying it.

The ending is too abrupt (but it was at a stopping point). This is to be expected since it is only a 90 minute book. I just found out that there are two more books that are about 3 times the size of this book (over four hours each). I will end up picking those up.

too short but a fantastic world

The book is a short one, but its worth the ride. The other two books are just as good, or even better. You probably won't fall in love with the protaganist, but that's only because he`s easy to forget .... what was his name again? (read the book, you'll understand the joke)

Sherman is a nerd who has a crush on the pretty New student. The catch? She's a succubus! Even more unusual? Sherman can SEE it. in fact he can see every monster for what they are. now his world is being turned upside down and inside out!

good but too short. nice work by the narrator.
pick up all 3 books if you want a full story.

Sherman is a geeky senior in HS with a crush on Charlotte, who is a good witch of sorts. Somehow spirits are unleashed and the result is pure chaos in the school building. Its a sweet, hapless story that ended too soon. Narrator David Dietz really put his energy into the voices. Great story!

cool idea for the story.

just really loathe the way the mc acts like an annoying sidekick with all the dumb questions at the worst timing. the only thing I dislike more than that is the narrator's shrill and nasally voice he used for the mc. I thought the mc is supposed to continue the story through their actions not the mc's gf dragging a spineless dweeb.

Brief experience but comical and fun. I actually went ahead and listened to the other books and they were also enjoyable.

I read the premise of Hell High and thought it sounded like dark comedy with lots of potential. After reading them, I have to say I was right! A lot of fun dark humor ensues.

Sherman is finally a senior in high school. That doesn't matter much, because a nerdy, anime and comics addicted kid like him, who is literally ignored and overlooked by everyone, even his parents, has no chance to get Charlotte, the girl of his dreams. Sounds like any 80's teen comedy, right? Did I mention that the girl of his dreams has wings and tail? Or that 9 out of 10 students in school is some kind of supernatural creature, whether it be Devil, Vampire, Werewolf, Naga or just about any other creature you can imagine? Sherman has seen them his whole life, so sees nothing unusual in the variety of &quot;people&quot; After following Charlotte as she left the cafeteria in an unusual rush, Sherman follows her into the Boiler room, where she confronts him. He lets slip he can see her true form, which is supposed top be impossible. He lets slip he can see ALL their true forms. This is a problem, since there are many factions actively fighting one another, and they are not allowed to show their true forms on Earth. This is especially a problem since Charlotte has been sent to assassinate a devil, and has been unable to find him so far.

After Charlotte confronts and kills the devil, all hell breaks loose, somewhat literally, as some of his fellow supernaturals of his faction discover his body and give chase. Since there are multiples of them, this doesn't look good for Sherman and Charlotte as they try to escape. After pulling the fire alarm of the school in hopes of escaping from the crowd, they are almost captured. Sherman somehow finds another ability, that of breaking glamours. As every supernatural lays exposed in true form, fights to the death suddenly burst out all throughout the school! The scene is played for laughs and horror at the same time.

I was really pleased with the characters in this book. Sherman comes across as a real person, and his musing to himself about Charlotte, comics, manga and other pop culture make for some hilarious scenes. Sherman bases his actions a lot of the time on stuff he's seen in comics and manga. Just funny stuff. Charlotte is also a fun character. Going back and forth from teen girl and big bad succubus assassin, its hilarious watching her try to deal with Sherman's mooning over her, especially since she, like everyone else, can't remember his right name. Since it's a shorter story, the rest of the characters aren't as fleshed out, they are still filled out enough to make good contributions to the story. The high school setting felt real, like every high school I've ever been in.

David Dietz handles the narration. He does a great job switching between characters, and gives each character a life of their own. His narrative pacing is good, and really sucks you in to the story.

All in all, this is a fun novella that is a good start to a series I hope goes into quite a few more volumes.

Man he really set a interesting world with an identifiable hero, the progression was ok right up until all hell broke loose. Like he could of wrote like 10~50 chapter between the first conflict and the second and they would of been gold I just know it. I'm netflix binge watcher so whenever something good ends a small part of me dies inside and I just needed more time with main character. AND Technically there is a cliffhanger.
Characters: S
World: A+
Plot: A+
Pacing: C