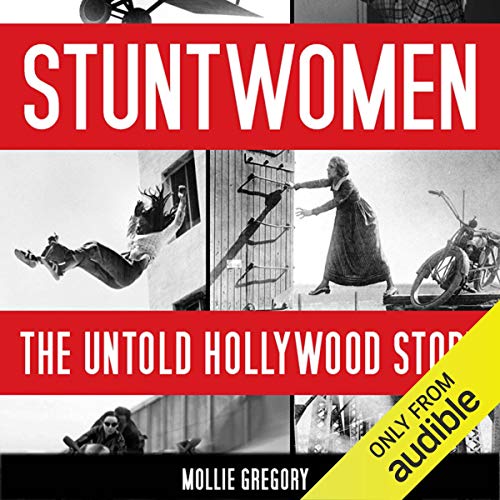 They've traded punches in knockdown brawls, crashed biplanes through barns, and raced to the rescue in fast cars. They add suspense and drama to the story, portraying the swimmer stalked by the menacing shark, the heroine dangling 20 feet below a soaring hot air balloon, or the woman leaping nine feet over a wall to escape a dog attack. Only an expert can make such feats of daring look easy, and stuntwomen with the skills to perform - and survive - great moments of action in movies have been hitting their mark in Hollywood since the beginning of film.

Here, Mollie Gregory presents the first history of stuntwomen in the film industry from the silent era to the 21st century. In the early years of motion pictures, women were highly involved in all aspects of film production, but they were marginalized as movies became popular, and more important, profitable. Capable stuntwomen were replaced by men in wigs, and very few worked between the 1930s and 1960s. As late as the 1990s, men wore wigs and women's clothes to double as actresses, and were even "painted down" for some performances, while men and women of color were regularly denied stunt work.

For decades, stuntwomen have faced institutional discrimination, unequal pay, and sexual harassment even as they jumped from speeding trains and raced horse-drawn carriages away from burning buildings. Featuring 65 interviews, Stuntwomen showcases the absorbing stories and uncommon courage of women who make their living planning and performing action-packed sequences that keep viewers' hearts racing.

What listeners say about Stuntwomen

A History of Stuntwomen.

A filler, something about the narration didn't quite sit with myself. However, a good untold story.