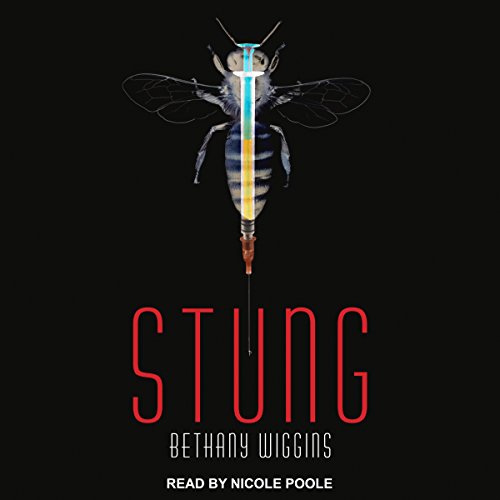 Fiona doesn't remember going to sleep. But when she opens her eyes, she discovers her entire world has been altered - her house is abandoned and broken, and the entire neighborhood is barren and dead. Even stranger is the tattoo on her right wrist - a black oval with five marks on either side - that she doesn't remember getting but somehow knows she must cover at any cost.

When the honeybee population collapsed, a worldwide pandemic occurred and the government tried to bio-engineer a cure. Only the solution was deadlier than the original problem - the vaccination turned people into ferocious, deadly beasts who were branded as a warning to unvaccinated survivors. Key people needed to rebuild society are protected from disease and beasts inside a fortress-like wall. But Fiona has awakened branded, alone - and on the wrong side of the wall.

What listeners say about Stung

this was so corny it made me cringe. teens would probably eat his up but anyone who has read a half decent romance will no this has no substance. the story line wasn't bad though but the romance just ruined it. the narration was a bit robotic though, which was odd as when she was doing the voices of other characters it was good. but Fiona's voice and internal monologue was Stephen Hawkins.

I went through this book in a matter of days, I really enjoyed how the Author started out as if you were the main character learning, remembering as the story progresses and develops. I felt that this could be a real story in our world if certain situations took place. In other words Bethany made this story fun and believable in an exciting way! Thanks,

Another story of how to be a weak woman.

Has Stung turned you off from other books in this genre?

I absolutely HATE books where the main female character is weak, fragile and dependent on a man to care and think for them.

Would you be willing to try another one of Nicole Poole’s performances?

I am angered that an author, especially a female author, depicts their main character to be this weak, helpless thing. I couldn't finish the book, I was too disgusted. This girl even fainted when receiving a small cut on her hand. Seriously?

I'm a sucker for post apocalyptic romance. this book was great and I loved it. Cant wait to get my credit so I can spend it on the next book.

This book intrigued me more than any other book has in my entire LIFE! Cant wait to read the second book!