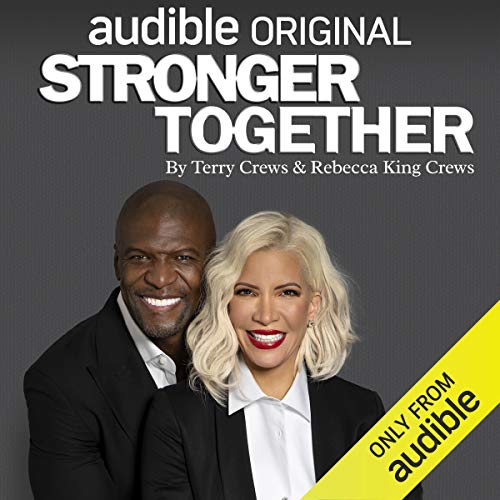 America’s Got Talent host and comic personality Terry Crews and his wife, singer Rebecca King Crews, share the staggering ups and downs of their relationship and how they weathered the myriad crises that have rocked their marriage.

As they share their journey, the mistakes they made, the moments that shifted their worlds, and ultimately, what put them back together, they provide hope, reflection and comfort. In this audiobook, you will also hear the kindness in their voices, and what it sounds like to have a partner who truly listens, respects and loves. The book includes a final coda about the year 2020 when the couple endured Rebecca’s breast cancer diagnosis and controversy around Terry’s social media comments.

Honest, intimate and filled with hope, Terry and Rebecca make you feel if they can survive it, you and your partner can, too.

What listeners say about Stronger Together

I've always been a big fan of Terry Crews and even more so when he came out about his pornography addiction. Hearing about this audio book and how open he and his wife were going to be I knew I just had to listen to it!
While it starts off a little cheesy and awkward, once the Crews start opening up you can't stop listening. They are incredibly brave to share some of their most personal struggles and do so in a way that is real and thought provoking. It has given me so much to think about within my own marriage and gives me great hope for what our own future will be.
Terry and Rebecca thank you for putting this out in a time when so many need it. Thank you for your examples.
Listen to this book!!!

Stronger Together is an honest account of a Hollywood couple who’s marriage has endured the test of time and made it through what many marriages go through. It was a story of struggles, mistakes and victories. I listened to the entire book on the first day I bought it. It was great to hear Terry and Rebecca’s story in their own words told in their own voices. You will appreciate this book!

this book is powerful and healing. the dynamic between these two is so beautiful. thank you for allowing God to use you!

My writer/poet uncle used to tell us “ It is good to hear a sermon (talking), but more profound to ‘see’ a sermon walking. Thank you Terry and Rebecca for ‘ walking’ the walk. Your example is so inspirational.

To take serious, real life matters and have them laid bare, and then to still feel uplifted at the end... It’s like a breath of fresh air, the scent of flowers blooming in spring.

There is so much venom in the world, this book is a welcome respite from the trials and tribulations of daily life. A wonderful piece of work that challenges the mind to think about the world we live in through a lens of optimism and hope. That no matter the challenge you face, there is light and goodness, that there can be positive change.

So often these days fear is everywhere, division, and mistrust. This is about healing and self reflection, and it brought me to tears of joy.

Terry and Rebecca are a breath of fresh air! I thoroughly enjoyed their honest and raw banter, while providing valuable lessons everyone can use. Cheers to you both!!

heartfelt but I didn't love the vibe

These authors definitely went for it and made themselves vulnerable but I think Terry conceded too much. I think he took too much blame for the relationship and Rebecca seemed cold.

Must listen for those in marriage struggles and those without. Great book.

This book speaks that in order for true intimacy you must be fully known to be fully loved. Often we hide the dirty 10% but you’ll never feel fully content and fulfilled in our marriages without be painfully open. It’s God’s design to forgive, fight for, and accept the whole person just like he’s has for us.

I love how this book aligns with a lot of my views and has challenged me as a man to give my wife what she needs, to be honest with myself enough to put barriers in place, and to know that she is worth all of it.

For those thinking there is greener grass just remember they came and painted it yesterday.

We have NO IDEA about what others go through!!

I absolutely loved the truth, compassion and patience that was put into sharing this message. People never know the struggle of what happens behind closed doors and sometimes forger that famous people are still JUST PEOPLE! Grateful for the shared message of hope in relationships as a whole.

Kept wanting to listen more and more. Was able to finish the book super fast because the content was so enticing. Wonderful, inspirational and well performed.

The way they go back and forth narrating the book to you is pretty neat. They surely have a fascinating story to learn from as far as their upbringing and marriage is concerned. By the end of the book they got a little preachy on modern times and political climate, which I didn't think fit or was necessary.

I loved this book throughout. well done Rebecca and Terry Crews. heartfelt and a really interesting look into what it means to be a "real man". Terry and Rebecca are really inspired