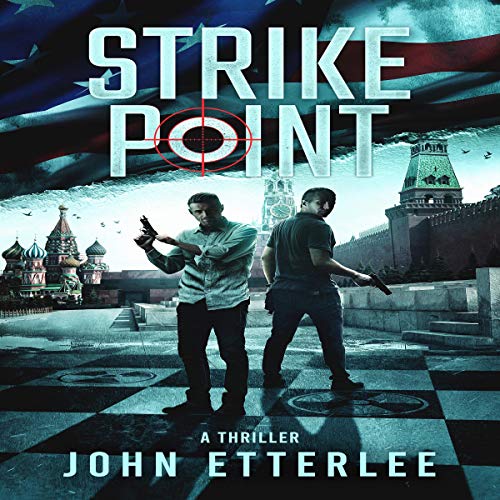 The threat of nuclear war...

One team sent to stop it...

And a ruthless assassin who will hunt them to the ends of the Earth...

CIA operative Roger O'Neil goes deep undercover in Russia and teams up with a group of SAS soldiers amidst a growing nuclear threat against America and a ruthless killer stalking them from the shadows.

Former US army ranger Roger O’Neil is living quietly on his Montana ranch with his family, raising horses and teaching his children to appreciate the simple life. With his horrid past behind him, he wants nothing more than to live the American dream. But, that dream will come at a high price.

America is at the brink of war with Russia. Roger is pursued by a mysterious agent and reluctantly recruited into a new CIA clandestine unit. Sent undercover into the heart of Moscow as a Canadian tourist, Roger slowly begins to unravel the biggest international conspiracy committed by any country since the Cold War.

After a raid on a sleeper cell in downtown London, British Special Forces collect evidence that points them straight to Russia's nuclear weapons program and their cooperation with the CIA.

With tensions rising to a boiling point, Roger and the SAS find themselves directly in the middle of an impending nuclear war between the East and the West.

And, a shadowy Russian assassin hot on their trail.

As the Russian leadership continually taunts the American president, and with fear among the public at an all-time high, can they defeat the most lethal contract killer in Russia and prevent an attack on American soil in a deadly game of nuclear chess?

Or is this the beginning of World War Three?

What listeners say about Strike Point

I did not read or listen to the first book. However, it does not feel as though I was missing out on much while listening to this book. I will definitely have to pick up book 1 though.

I wasn't sure if I would like this book when i first got it, It is not my usual style but I have been getting bored of my usual books and have decided to branch out with other selections. I am very happy that I did! This was a great read/listen and I thoroughly enjoyed it. I like to listen to audiobooks while at work so that I can do my work and continue to "read" while I do so. Since Covid-19 has set in, I have been doing a lot of reading either ebook or audiobooks.

This was a great listen and the narrator was pleasing to the ears. Before buying any book, I always listen to a sample to make sure the narrator is not too grating to my ears. The storyline was great and the characters were pretty good as well. This was definitely worth the listen and i will be keeping an eye out for more books by both this author and narrator for sure!

I enjoyed this book. This is book two in the series and I can say having missing book one that you don't need to have listened to the previous book go enjoy this one, I never felt like I was missing any of the story line. There is plenty of action and intrigue that the hours just flew by. I tend to to find with spy thrillers that I have problems keeping all the foreign names straight and get easily confused but this isn't the case with this story. I don't know if that was because there isn't that many different characters or the write just did a good job with the writing. There was a few surprises, in other words a good listen and a series to keep an eye out for.
Roger just want to ride horses with his young son but two powerful governments have other ideas. One is the Russian government, or to be precise the Russian president who wants to take back his country's power by starting a war.The other government is his own, they want him to be the man on the ground in Russia putting a stop to it. How can he fuse when his country comes calling and that by helping to stop a nuclear attack he is also saving his family. The Russians have been planning the attack for years and don't like the idea of an American ranger and an English SAS team putting a spanner in the works so send out there own assassin to see that the mission goes ahead. And so begins a deadly game of cat and mouse.
The narrator was okay and I had no problems understanding him but he did have a gruff voice and spoke quite slowly. Very English sounding but he did give some of the characters some very good accents.
I was given this free review copy audiobook at my request and have voluntarily left this review.