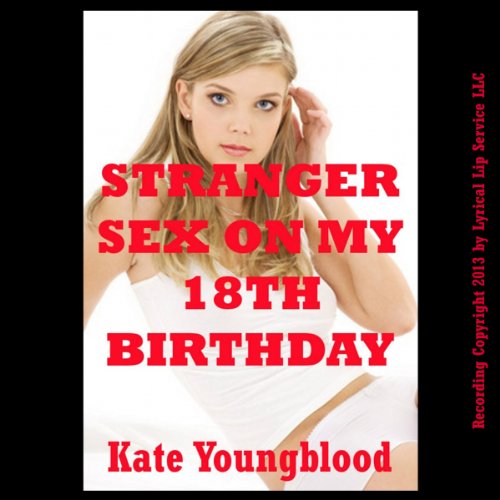 Stranger Sex on My Eighteenth Birthday

Taylor has her eighteenth birthday all figured out. She's particularly excited about her plans for a tattoo and hanging out with her friend Alice. Things don't go as planned, though! Alice gets caught up with a boy, and the tattoo artist isn't coming in. About the only good thing is a hot guy working the desk at the tattoo parlor. Taylor thinks Kai is amazing, and he's about to prove it. Before long, she's right in the middle of a stranger sex experience!

Warning: This audiobook contains very explicit descriptions of sexual activity during a stranger sex encounter. It includes barely legal sex, oral sex, deep throat, rough sex, and semen swallowing. It is intended for mature listeners who will not be offended by graphic depictions of sex acts between consenting adults.

I wondered what he would be like in bed as he kept talking, "Duke did this tattoo. That's how I started coming here, because of Duke. Finally I was here so much that I ended up getting a job at the desk. Why not, right?"

"Totally. This looks like a great place to work."

He laughed, "Oh it is." He threw a lollipop at me from a jar on his desk and winked, "Happy Birthday, kiddo."

My heart sunk again when he called me a kid. He was really, really cute.

The phone rang and he answered it, "Yankee Heart Tattoo, Kai speaking."

He continued to nod his head and said, "Yes" a few times before hanging up. After that, he looked at me with a frown and said, "I've got bad news for you, kid. Duke's not coming in for a while. Hungover. Big time."

Now, my heart was really broken, just like Kai's arm tattoo. Nothing was going too great today other than winning five bucks.

I guess Kai could see the heartache on my face so he said, "Come here." I left my purse on the couch and went up to the desk.

In a lower voice, Kai said, "Chin up, kid." Then, he raised his arm to my head and grabbed my bun. He pulled it out and started playing with my hair. I started to say something, but I decided to shut up. I wasn't sure what was happening or going to happen but I knew I liked it a lot. He pulled me closer to him and slipped his tongue in my mouth. He pressed against my lips hard. I moaned a little as he explored my lips and mouth. He felt strong and good. I could smell his aftershave. He smelled like a combination of musk and licorice. His stubble rubbed across my face and I could feel my white lace panties starting to get wet.

What listeners say about Stranger Sex on My Eighteenth Birthday