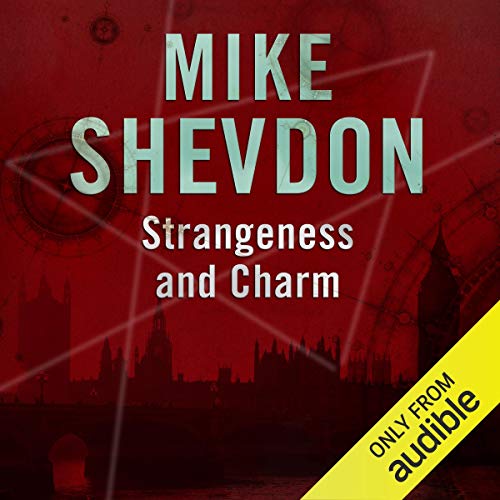 Alex has been saved from the fate that awaited her in Bedlam, but in freeing her, Niall has released others of their kind into the population. Now, as Warder, he must find them and persuade them to swap their new-found liberty for security in the courts - but is the price of sanctuary to swap one cage for another?

Mike Shevdon lives in Bedfordshire, England, with his wife and son, where he pursues the various masteries of weapons, technology, and cookery. His love of Fantasy & amp;SF started in the '70s with C S Lewis, Robert Heinlein, and Isaac Asimov and continued through Alan Garner, Ursula Le Guin, and Barbara Hambly. More recent influences include Mike Carey, Phil Rickman, Neil Gaiman, and Robert Crais, among many others. He has studied martial arts for many years, mainly aikido and archery. Friends have sometimes remarked that his pastimes always seem to involve something sharp or pointy.

What listeners say about Strangeness and Charm

It was hard to get through due to the constant whining of most of the characters. The best parts were when actions were happening and Blackbird and Rabbit weren't communicating.

I very much enjoyed the first two books in this series. This book contained too much whiny dialog by most of the characters. At one point or another, each character has a whiny exchange with another character. Blackbird loses her edge and becomes a jealous whiny new mom, Alex is a one dimensional whiny teen, and even our hero, Niles, whines throughout! I'm hoping the author got all the whining out of his system with this book. If the next one is a whine fest I won't be able to finish it.

The world Mike Shevdon has created is intriguing and leaves me wanting to know more about the universe and its mystical denizens. However the key characters are really beginning to rankle! Yes I should have realized that complex characterisation was never an objective when the main character morphed (almost overnight) from a pitiful 42 year old, divorced accountant to an immortal, magic-wielding ninja-fairy, capable of seducing heavenly, orgasm-inducing nymph-babes within hours of meeting them, but... The inconsistency in the behavior of key characters really detracts from the story. Niall may be an ass-kicking superhero, but geez can't he whinge! One minute he's the epitome of calm, devastatingly-cool hero, the next he's a whining sissy who can't get a word in edge ways when his ex wife starts berating him for leaving the toilet seat up (or something). As for Blackbird who swings from all-powerful matriarch to wet lettuce and back (sometimes in the same monologue)... The other characters fade to beige as shallow stereotypes (Sgt. Maj. Garvin, terminally teenage Alex, almost all of the true fairy).

Despite wanting to shout at Niall to just use his nukes in every scene rather than dilly-dallying around like some morally overbearing broken record the books are actually quite fun. I can't wait to listen to the next one!! And Mike... We need a montage. :)

Awesome. Fantastic narration. Not sure I like young Blackbird's Belfast twang and I can't tell the difference between grumpy Niall and Garvin sometimes, but 10/10 for really good, engaging narration.

Do you think Strangeness and Charm needs a follow-up book? Why or why not?

Absolutely. If only so we can see whether Niall finally grows some and Blackbird rediscovers her girl-power.

Please do a global find/replace of the words "...you don't understand..." with "...I'm a fairy. There, I said it..." It would make all those painful familial interactions soooo much easier.

Everyone is annoyed at everyone. It gets grinding after a while. Found the constant bickering, passive aggressiveness and whining of all the characters annoying.

A good read for fans of urban fantasy.

This reads like some of the situations actually happened, not the magic but the interactions.

Not quite as good as the first two, but still listenable. I feel that too much time was spent trying to instigate the storyline, it felt like the characters weren't as real as they had been in the previous novels.