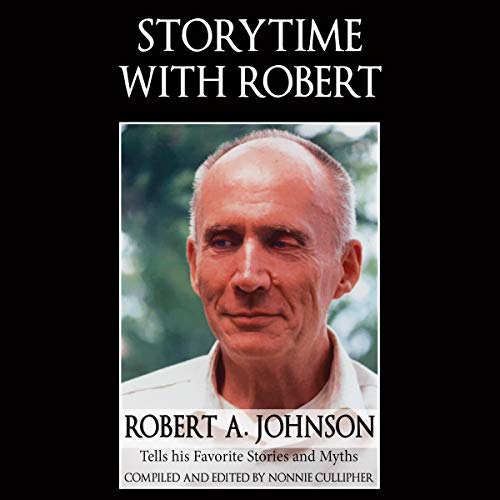 Storytime with Robert: Robert A. Johnson Tells His Favorite Stories and Myths

Robert A. Johnson was more than an international best-selling author of 15 books, brilliant and influential Jungian analyst, and acclaimed international lecturer; he was a master storyteller. This collection is transcribed from Robert’s own tellings throughout the years. Robert told these stories, his favorites, to an appreciative and revering community each night at Journey into Wholeness events from 1981 to 2001. Robert collected several of these stories in his beloved India, but the audiobook includes stories and myths from Chinese, Native American, Mexican, and European traditions. Each story is introduced by a colleague, mentee, or friend whose life was profoundly changed by the presence and teachings of this wise and other-wordly sage.

Robert taught us we could enjoy a myth or a story as a child would, or we could listen more carefully to discover a road map for our own inner work. Magical, humorous, tragic, enigmatic, these stories illustrate Robert’s capacity to speak to the delights and adversities of the human experience, and to our collective quest to become our most conscious and authentic selves.

What listeners say about Storytime with Robert: Robert A. Johnson Tells His Favorite Stories and Myths

glad we have achieved his stories.. Johnson was a living master. very very enjoyable. thanks