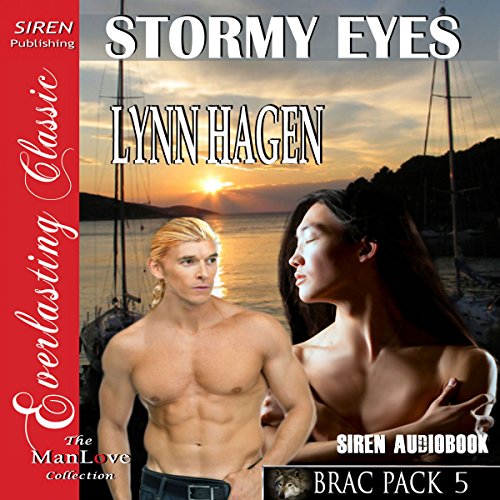 When Storm Wishfall is sent on an errand for his alpha, he doesn't expect to discover two young Asian men hiding on a boat in fear for their lives. He definitely isn't expecting one of them to be his mate. After encountering the young men's captors, the alpha devises a plan to rescue the three other men who were kidnapped along with his mate, Kyoshi, and Kyoshi's cousin, Keata, and the pack must band together to curtail a human trafficking ring before any more innocent lives are ruined. In the meantime, Kyoshi must come to terms with his new life. Storm searches for a way to convince the cynical human they're destined to love each other, but something lurking deep inside Kyoshi is forcing its way out. Are these two as different as they believe, or can they find a way to share their lives?

What listeners say about Stormy Eyes

This is the stroy of Stormy and Kyoshi and how they survive the trials and tribulations that are set in their path. Stormy meets Kyoshi and his cousin Keata when he goes to rescue them and get information from a fisherman who finds them hiding on his boat where they are hiding from the men who kidnapped them, transported them and intended to use them in the sex trade. They are rescued my Stormy and taken in by the pack. Kyoshi must learn to trust in his wolf and fit in with everyone else. I highly recommend this audio book and the series as a whole.

I'm in love this brac pack books . I can wait until the next installment of the series.

Kyoshi and Keata are hysterical!

In this series, a “warrior” – a wolf shifter who is almost always super alpha and super huge- finds a “mate” – usually much smaller and quirky – and then proceeds to have some kind of adventure.

In this case, Storm finds and mates the feisty Kyoshi. Storm is all wolf but has mage blood in his lineage so his eyes change colors. Kyoshi is a rescue from a sex slave ship, tiny, spunky and full of protectiveness for his cousin Keata.

Kyoshi and Keata have some pretty exciting reveals coming up which help explain their easy acceptance of wolf shifters in existence and there continues to be a threat from their first captors.

These Brac Pack stories are so much fun! Sure, each of them is VERY SIMILAR to the other, but they are also each unique and full of humor.

There is always a fairly quick insta-love portion, a “rescue me” portion and a “HEA” portion. But in between we get laughs, fun and hot smexy times. Since they are meant to be read in order, we also get to see the previous mated couples frequently and by the end we not only have over 30 books in this series but at least three other off shoots that also intertwine with this series making nearly 100 books that are all somewhat related and now we get the new generation which includes the kids!

I’ve loved this series and it’s companion series and I recommend reading them in order of release for the most benefit.

So far Johnny East has narrated all the books in this series and that’s wonderful. He does a great job with the deep Alpha growly voices and he tries at the various accents (in this case a vague Asian) and tries to modulate between all the different characters as best he can given the vast number of men involved in these stories!

I was a bit … confused… when he chose to give both Keata and Kyoshi rather deep, masculine voices when they are clearly shown as being small and rather effeminate… but… I loved his “accent” and attitude for them so I quickly got over it!

If you put your mind on pause and just enjoy the fun that is crazy shifter romance – you’ll enjoy this series very much!

Highly recommended in both book and audio format.

Wish all books were on adubile!🙂

I wish the complete series were available on adubile. This series is one of the best I've listened to. The storylines and characters + the continuation from the previous book along with the characters, good job. The narration, OUTSTANDING. He's doing a fantastic job in bringing them to life. The continuation of the series may be available on my kindle, but I would refuse to read it. It wouldn't be the same. I highly recommend this series!👍👍☆☆☆☆

a cat and a dog

Read the blurb and you get the book except for a lot of fussing around and one unusual shift.