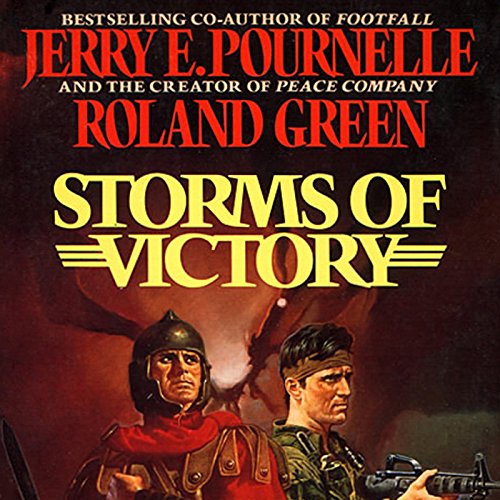 The adventure begun in Janissaries continues.

Kidnapped from Earth as they were about to die in battle, Rick Galloway and his band of mercenaries, like the other human slaves on the planet Tran, will not be missed. Subjects of the Shalnuksi slave masters, they are forced to harvest the priceless drug surinomaz. Now, even as slaves, Earth's transplanted warriors are locked in battle - against one another. But an epoch is ending. As the Demon Star sweeps toward its devastating apex, the slave masters flee the planet to await its annihilation in safety. Soon all life on the planet will cease, leaving it ripe for repopulation.

What listeners say about Storms of Victory

Now be cautioned. Be forewarned.

There is no book 4. This story ends in a cliffhanger. I Wikipedia'd it the day I finished and saw that there was no release date or status update since 2005. And here's the kicker, the author had a stroke the week before. I wish him the best in his recovery, hopefully he can crank out a finale for the series.

Had I known this was an incomplete story with no payoff, I can't say I would've invested in all three books. The third does improve over the second, although I really enjoyed the first because it remained easiest to follow.

It's a good series, not great. It is what it is.

A story with no ending

I really enjoyed this series, but nothing discussed in the first few chapters of the first book ever concluded. They landed on the planet, set up shop, but then never traded with the aliens, no a bombs were ever dropped, the council never decided what to do with earth...
Apparent there was a loooong 4th book in the works that we would hope wrapped every thing up, I wonder if it will ever come out though...
In a nut shell, this would make a great TV series, but the books just end half way through the first season...

I've loved this story for many years, and the narrator brings it to life! Hoping for the next book in the series, Dr. Pournelle!

A great addition to the saga. Progress continues on Tran but something big is brewing. Szarabajka is brilliant. I really hope he does the next, final book, Mamelukes.

My only complaint is that this book ended, just wanted it to carry on.

the story was great. excellent audio books for work. they got me through so many wiring harnesses. a point of contention however, as a vet it very distracting to hear the reader use the word "cal-
vary" instead of "cavalry" when referring to horse mounted troops. ("Cal-vary" is a religious term for Golgotha hill where Jesus was said to be nailed to a cross)

I really liked the further adventures of Rick Galloway. I reccomend it. I'm now going to get the next book mamelukes

Very disappointing that the author decided to focus on fifty different characters.

The book became so hard to follow that I lost interest and stopped listening.

You would need a flow chart to understand what is going on.

another great addition to the series

this was another pediatrician to the series unfortunate probably the last. hopefully the co-author will pick up the series finishing finish it to its end.

Listening to this series has made me feel 50 years younger! Ah, for more stories like this . . . reminds me of the Golden Age of science fiction. I also recall this narrator as a character in The Equalizer (the series, not the movies). What a great trained voice choice for this series.