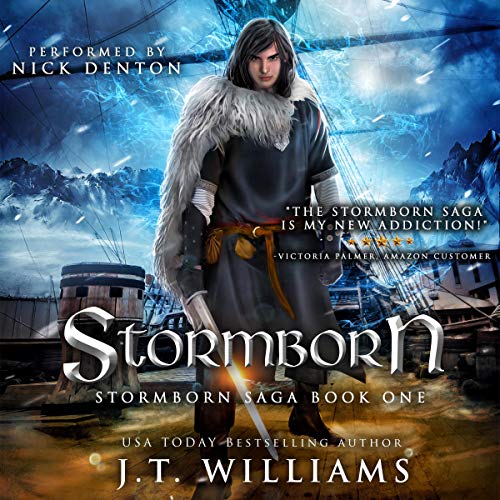 Stormborn (A Tale of the Dwemhar)

Valrin was born of the sea, or so he was always told. Orphaned on a desolate island, he knows nothing of his true past and wonders of his future...until the unexpected arrival of a mysterious ship changes everything.

For a fleeting moment, he feels like he might have an answer to everything and then his life is suddenly ripped apart. The one person that loved him is killed protecting him and a wanted sea-captain and his misfit crew become the only hope Valrin has. If he is to survive the coming darkness, he must learn who he truly is.

But there is someone that will hunt him. Someone that will want him dead to prevent the mere chance of what he could become. He has a destiny to unlock but will he get there before he is destroyed?

What listeners say about Stormborn (A Tale of the Dwemhar)

the world is rich and engaging.
the action seemed very rushed.
I will read more, but this is mostly a quickie.

It was good, the story of a boy who lears he is more than he appears and it’s destined for greatness. The narration was good.

good adventure story. nothing amazing but a fun action packed start to a sea-faring adventure.

I enjoyed listening to the book. It really wrapped me up in the story. The story was interesting and captivating and Nick Denton really made it come to life. A great fantasy read! I can’t wait to hear the rest.

I received a free copy of this audiobook in exchange for an honest review.
A fast ride through a wonderful glacial world and larger than life characters. Right down to the vast array of voices by the narrator, I liked everything about this audiobook. I look forward to listening to more of JT. Williams' work.

Back To The Sea

The orphaned Valrin had always been told he belonged to the sea but until he finds himself onboard a ship with a somewhat sketchy captain and crew, he'd never had much of a chance to become acquainted with deep water. All that's about to change in this first story of a new series.
A lot of the book's dedicated to establishing the characters, providing a back story and getting Valrin the trappings for his future life so it feels a bit short, but there are some great battles, lots of drama and enough character development to leave you comfortable with and attached to the characters. As an added bonus, the author deals well with the usual struggle between leaving the reader with enough loose ends to attract them back to read the next volume while avoiding the everything in the air cliffhangers that so often make first books feel like a brazen effort to coerce the price of another book out of the audience by intentionally splitting a story at the most inconvenient spot.
Kudos to J.T. Williams. This one left me well satisfied and definitely wanting more.

Quick Story to Whet Your Appetite

Stormborn makes for a fast read (listen), not only because of the length, but also because it is packed with things going on. The writing is well done and the world seems fascinating from the glimpse we experience. I haven't yet experienced any of the other books set in this world; and I think the only thing keeping this story from being a solid 5-star adventure is the length. It didn't feel as if I got to know the characters well enough to be emotionally invested in them. There's also only glimpses at the greater struggles in the world. Honestly, I feel I could very easily become invested the larger tale unfolding within this world. I would only need to experience more.

Narration is good here. I was nervous, at first, about how well the narrator's accent would fit with the story. However, it works with the story just fine.

I received this audiobook for free in exchange for my honest and unbiased review.

an interesting start to a series that looks promising. Looking forward to listening to more.

If you're looking for a quick, at-sea adventure with an interesting plot that's easy to follow, this would be a great pick. It's a good, easy listen with a little bit of world building and a little bit of fantasy. The narrator was pretty good for this era/genre.

A promising start for a series

It took me a little while to get used to the narrator (audiobook version) but after I did I found this to be an interesting start for a series. I want to see where this author takes his characters. I have a feeling this will remind me of the Forgotten Realms books.