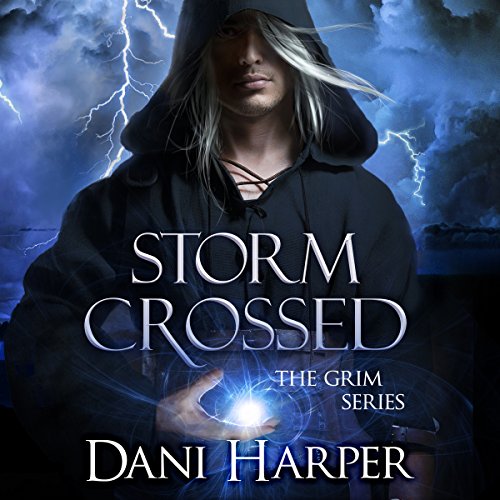 The latest stand-alone novel in Dani Harper's Grim Series will delight old and new fans alike, transporting them to the ancient fae realm beneath the modern human world, where magic rules and menace abounds....

Heir to a noble fae house, Trahern is forced to watch helplessly as his twin brother is cruelly changed into a grim - a death dog - as punishment for falling in love with the wrong person. Trahern doesn't believe love exists, but he will do anything to keep his brother alive - even join the Wild Hunt and ride the night skies of the human world.

Lissy Santiago-Callahan believes in love but has no time for it. She's busy juggling her career as an academic and her home life as a single mom to a young son with Asperger's. Her hectic life in sleepy eastern Washington is made even more chaotic with the sudden arrival of a demanding fae and his unusual "dog".

Mortal and immortal have nothing in common, and the attraction between Lissy and Trahern surprises them both. But when their desire places Lissy and her child in the path of a deadly faery feud, will the connection last, or will their separate worlds prove too great a divide?

What listeners say about Storm Crossed

I have loved the Grimm series, and Storm Warned is no exception. A wonderful assortment of characters , a lively story, written with affection and humour and masterfully narrated by Justine Eyre. Thoroughly enjoyable.

I think I found a series to binge!

For those of you how prefer the short and simple version of reviews here you go: I enjoyed this book. It has a good blend of realistic motherhood and Fae magic. They both play an equal and important part in the story. The characters have depth. The story is paced just right so that the story is well developed. It's a love story but it's not overdone. The story has a good mixture of humor, magic, love, sex, and action. It's mild enough that your mature teenager (16 -18) would enjoy it and but luckily for adults it doesn't have the adolescent speech or banter. It's a grown up book with grown up themes but nothing they won't see on CBS. Her writing style reminds me of Dannika Dark.

For some reason, the last 20 books I've read about Fae/Fairies were sex, sex, sex... and I'm not even gonna mention the LKH series.

But this other has brought us a LOVE story. About L.O.V.E. Can you believe it?

And on top of that... it's actually a GOOD story. The Fae prince falls for a human woman with a child. The prince comes with his own baggage including an evil fae queen mother.

I didn't like that fact that, Lissy, is such a whiner when it comes to Trahern. There is a part where she freaks out because the horses aren't touching the ground. REALLY? If your boo is Fae who does magic, do you really need an explanation about a flying horse? C'mon man!

I didn't like that the climax was so short. When Tahren finally faces the evil queen there was an opportunity to expand there. More mind games and scheming before the big battle.

Overall, I enjoyed how Dani presents the story of mothering an autistic child. It's done really well. Many mother's struggle and fumble and showing these parents even if there is a bad day, it doesn't mean you have failed. It's just a bad day. Also some of the children struggle with expressing their feelings, it doesn't mean they are incapable of feeling them. Well done to an author that researched for her book. Now there will be those how say that some of it was over the top, so to those people I say IT'S A DAMN BOOK NOT A BIO. IT'S SUPPOSED TO BE DRAMATIC.

The narrator for this one is Justine Eyre. She voiced each character well. I especially enjoyed her narration of Taharyn (whether it was an authentic accent or not). People often complain on the Irish or Scottish accents, but to a southern girl like me, I thought she sounded good.

I think with would have been better with stronger heroine

Oh my the heroine of this storyline was just dumb... made stupid comment and behaved ignorantly.

One would think if you were surrounded by magical friends you would be slightly smarter about your decisions and comments.

This women was just too emotional without thought. A protective mother should be a lot quicker on the up take when it comes to keeping your child safe.

Think about the horror movie where the teen age girl decides she is scared when she hears sounds but instead of calling the police or leaving the house she run towards the noise to investigate ... yep this book in a nutshell

It’s over? Why is it over? I don’t want it to be over! Please, please, write another one, and soon! It’s obvious I loved it immensely. Audio version more than written one but just because it was done even better than I could imagine in my head. This is my favorite fae world so far and please keep the story going. I’d like it best if the next one would be Lord of the hunt’s story 🙃

A great book in this series, I really hope the author decides to add more books in this series! I live this world she has created. Great narration as well!

This was the best in the series thus far. Unlike in book three the love between Lissy and Trahern built and I connected with and believed in it. I loved how Characters from the previous books were interwoven into the story. A story rich in verse vocabulary myth magic family and love. Trahern learned and grew even as old and jaded as he was. I was sad that Lorain still didn’t have love and that Bryce wasn’t returned to fae form but maybe Bryce will be freed in a future book and a queen will take Lorain’s heart. But which queen ? Can’t wait to find out.

I COULDN'T GET THROUGH THREE CHAPTERS WITHOUT BEING BORED TO DEATH. LISTENING TO THE READER IS LIKE LISTENING TO WHITE NOISE. IT ALL BLURS TOGETHER INTO THIS HUMM OF NOISE. IT NEVER CAUGHT MY INTEREST. I LISTEN TO AUDIBLE WHILE COMMUTING AND THIS BOOK ALMOST PUT ME TO SLEEP. SO DANGEROUS. I DONT RECOMMED IT IF YOU LISTEN WHILE DRIVING. IF YOU USE AUDIBLE TO HELP YOU FALL ASLEEP, THEN THIS IS BETTER THAN ANY Rx. MAY I SUGGEST INFLECTING A LITTLE EMOTION IN YOUR READING. THE WHISPER VOICE IS LIKE NAILS ON A CHALKBOARD. SPEAK LOUDER. WE'RE NOT PRE-SCHOOLERS. I VIEW AUDIBLE BOOKS AS A VIRTUAL BROADWAY PLAY. SET THE STAGE... ILL USE MY IMAGINATION TO COLOR IN THE STAGE. ........

A good story and an entertaining listening experience. A very interesting take on juxtaposing two different worlds together, and to me, a very unique way of introducing the concept.
The narrator's voice initially annoyed me a little because of how nasally I thought it sounded, but by chapter three I had actually started liking her voice and accents and by the end had decided she was quite good at sounding adorable, and noble, and scared and everything else.
I'd recommend sticking it out for a few chapters if you're initially on the fence about liking the audiobook.

Great reader and engaging story with heartfelt tones that surround family feeling, loyalty and commitment. I love little Fox and how his Disability became an extraordinary ability!

Loved it!!!! Like a lot. Will listen to this one again many times. Good job..

excellent is to mild

Thank you and well done to Mrs Harpeer and Ms. Eyre . I enjoyed every minute of it. my only disappointment is that Braith wasn't changed back. Maybe next book. ; )

Loved this book.. My secret addiction 😀

Justine Eyre is one of my favourite Narrators so I found this series by Dani Harper by accident but have to say I have had to follow the series because all the characters become part of the whole story.. I love it!!

I do love little Ranyon (sp?)
Great listen loving this series and would recommend to anyone wanting a listen to magical worlds and all that entails x

I really enjoyed this book! I love that the lead love interest was a Fae letting us learn more about them. The story had me gripped from start to finish, I only wish we'd seen a resolution for Braith as Lord Lurien had hinted to Trahern that he may find how to help Braith while teaching Fox. Can't wait for the next book!