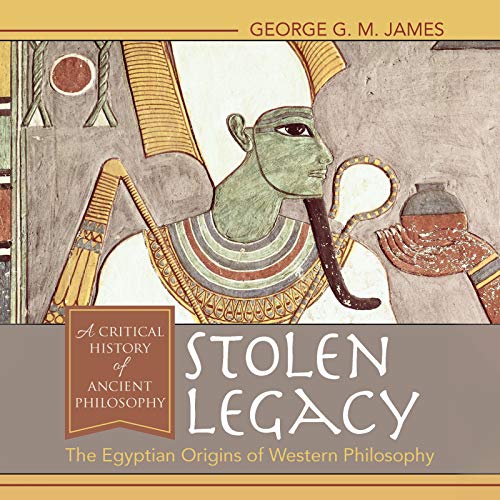 This is the definitive audio edition of Stolen Legacy, skillfully and soothingly narrated by Karen Chilton, the award-winning narrator of The New Jim Crow. Please compare the sample audio of this recording to any competing audio samples, and you will see why the Karen Chilton reading is the preferred audio edition.

In this bold and uncompromising audiobook, George G. M. James argues that the “Greek philosophy” in which nearly all of Western culture has its roots actually originated in ancient Egypt.

Drawing on careful historical research and a radical rethinking of the conventional narrative of Greek history, James asserts that our celebration of the ancient Greeks as the creators of Western civilization and philosophy is misattributed. In fact, he argues, our praise rightfully belongs to the people of Africa. Furthermore, this massive intellectual and cultural theft has helped lend credence to the damaging notion that the entire continent of Africa has contributed nothing to world civilization.

James explorers documented connections between celebrated Greek philosophers and the influence of Egyptian thought, proposing other possible links between northern Africa and Greece, as well. An important book for understanding the history of philosophy, culture, and race in the modern world, Stolen Legacy is not to be missed.

What listeners say about Stolen Legacy

Interesting and thorough research spoiled by a poor and unnecessarily repetitive narrative, and extremely one-sided conclusions. It claims the Greek philosophers - in their entirety - were nothing more than plagiarists. In the way it is set out, it reads like nothing more than a conspiracy theory. Such a shame. In arguing that the Egyptians were responsible for much that is taken as Western philosophy, it could have been so much more convincing if it didn't take such a vituperative tone. The narrator, Karen, has a lovely voice and manner, but she struggles so often with the Greek and Egyptian names which makes the story sound even less convincing. Nothing that some re-takes wouldn't have sorted out.