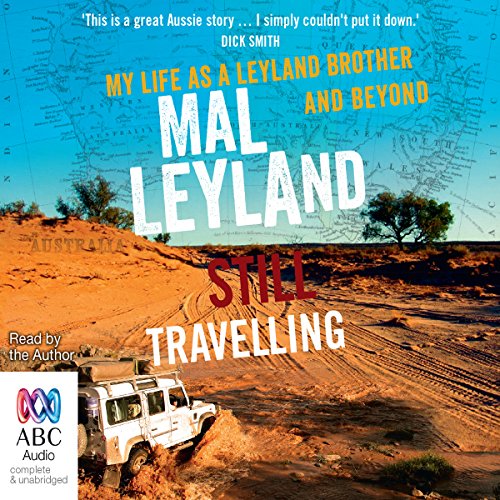 Next year is the fiftieth anniversary of the making of the Leyland Brothers' groundbreaking documentary, Down the Darling, which records Mike and Mal Leyland travelling down the Darling. Their film was sold to Channel 9 and later to the BBC. It was shown in 65 countries and selected by the Australian government to be shown at Expo 67 in Canada.

Unless you were alive and watching Australian TV in the mid-'60s through to 1980, when they were at the peak of their popularity, it is hard to convey the impact of these two pioneer outback adventurers and filmmakers.

In an obituary written when Mike Leyland died in 2009, their TV program was described as a "quirky travel show" watched by more than 2.5 million people at its peak. It featured the brothers in unusual or far-flung places around Australia which viewers had asked them to visit.

This book will be Mal's memoir; he'll tell tales tall and true from the road and from their lives during and beyond the iconic show.

"Almost everyone in Australia older than 25 has heard of the Leyland brothers, Mike and Mal. At a time when the Outback was still a forbidding, remote frontier, they single-handedly brought it into people's homes through their documentaries and a successful television series.... The Leylands have been credited with starting the four-wheel-drive revolution and huge recreational industry." ( The Herald Sun)

What listeners say about Still Travelling

A huge thanks to Mal Leyland for walking me back through some of my best childhood memories with this book... Your Story has inspired me to see my home first before venturing overseas

It would be un-Australian not to listen

Slow going in parts.
Reveals a lot about his own personality especially in tough times.
Interesting listen

Brought back some good memories

Watched the tv shows as a kid and loved them, great story about an Aussie icon from England.

listened, travelling all over the countryside

We used to play "the Leyland Brothers" as kids. My husband and I kept singing the theme song as we listened. Mal's story telling is captivating. In true Leyland style we finished the book under the southern cross overlooking the Indian ocean.