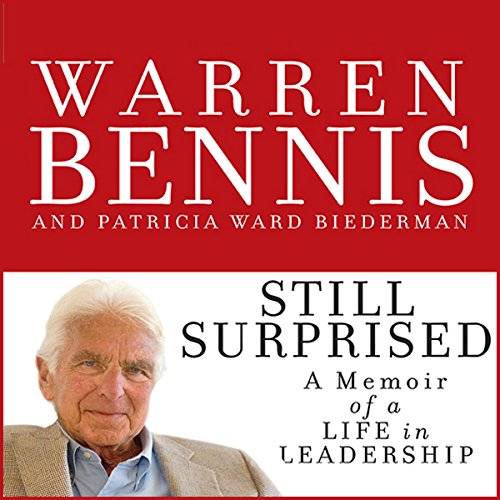 If many of your organizations have become more democratic, more resilient, more adaptable, and more transparent, it is because Warren Bennis has provided much of the intellectual and ethical fuel over the past half-century to our most influential and successful leadership experts and practitioners.

Still Surprised illuminates how the world-changing ideas of Bennis and his colleagues resulted from the searing crucible of their own encounters, events and experiences—not within a sterile laboratory of ideas. It demonstrates how students of leadership are formed by what they discover about themselves on roads that are opened to them by circumstances—and by the roles they choose to carve out for themselves as a result.

The memoir begins, appropriately, with the surprise of an awkward and confused teenage Warren Bennis being prodded into his first leadership position, in vicious combat during the latter stages of World War II. This child of the depression is then surprised by the opportunity to attend college, thanks to the GI Bill, at the raucous and revolutionary Antioch College. Next come a number of breathtaking roles: working alongside some of the world’s most intriguing and celebrated figures, from Cambridge to Calcutta, to reshape organizational life; successfully putting his own theories into practice as a university provost and president; and coaching not only U.S. presidents and top corporate CEOs but successive waves of ambitions young women and men.

This is also a memoir of our times, seen through the prism of Bennis’s own development during crucial inflection points of recent decades. His own medley of insecurity, hard work, determination to invent a new life, and growing capacity to engage others all came into play amidst transformations within our society.

“Warren’s humanity, joie de vivre, and intellect sparkle throughout this must-hear memoir. Each chapter in his fascinating life draws him inexorably toward becoming the father of leadership, showing why he is such a beloved and admired friend, mentor, and role model for so many leaders.” (Bill George, professor, Harvard Business School, former chairman and CEO, Medtronic)

What listeners say about Still Surprised

I found the book interesting, especially as he described aging and what that is like. The narrator was very difficult to tolerate because he was nasally and often added an extra sound when finishing words kind of like a half gurgle or [guh]. I increased the speed of narration to 150% which helped a little.

A good book about the man, but not his work.

I was drawn to Bennis' biography by those that credit him with being the 'father of leadership', so I was hoping for more about his work. Instead, it is an autobiography in the true sense, weaving an entertaining tail about the life experiences that drew Bennis into the study of leadership, but only a few (valuable) anecdotes on the topic.

Having heard Bennis speak before, I was originally glad for a narrator, as Bennis' delivery is very slow, but this narrator really ruined the book for me. The inflections he uses at the end of words were grating. I spent too much attention early in the book trying to figure out if the narrator had an accent I was unfamiliar with, or was trying to impart his own style. Good narrators add value to the audio book, and this one didn't do it for me.

In summary, if a sample of the narration doesn't put you off, listen for a great summary of Bennis' life, but go elsewhere if for more on his life's work.