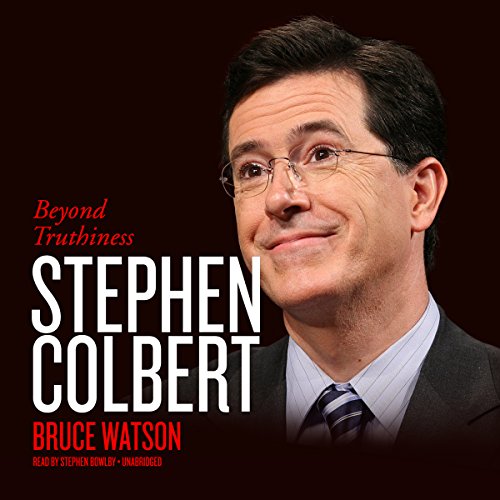 Stephen Colbert is far more than a comedian and improv genius. As head of his fanciful Colbert Nation, the quick-witted host of The Late Show with Stephen Colbert and former host of Comedy Central's The Colbert Report has delighted fans with his wit, audacity, and innovative uses of language and the media.

What listeners say about Stephen Colbert

I have always admired Stephen Colbert, and after learning more about his philanthropic side my admiration grows. He is truly one of the good guys.

I appreciated the attention given to his growing up from age 9 after tragic family loss. Interesting HS years & not experiencing more nurture for his talents. Somehow that brilliant mind got developed at Hampton Sydney ON HIS OWN time but he must have absorbed more. Early career years and sense of responsibility. A Southern gentleman who's maintained his humanity & nurtured his political awareness. Yes appreciate his humor continually, but readers will appreciate this TRUE SON OF The SOUTH even more as a MAN, husband and father more.

Stephen Colbert has got to be the smartest man on earth period to be able to perceive comedy and seriousness and make it not only palatable but leaving you wanting more, a talent so many will never possess. I just enjoy Stephen Colbert and I'm glad I listened to this book although I wish it had been narrated by Steven himself it was still very well done.

I started watching Stephen when he took over the Late Show after listening to my son, a fan of the Daily Show and Colbert Report, talk about him for years.
I enjoy his quirky sense of humor and quick wit.
I never saw the character described in this book, but now I know the roots of the Stephen Colbert that I’ve gotten to know and appreciate over the past decade or so.
Note: The narration was pretty good, but at times in the last chapter the voice sounded somewhat robotic.
Otherwise, I liked the book and getting to know my favorite late night tv host.

Couldn’t unplug! A wonderful presentation - but of course with this fabulous human being as the subject of the podcast - you couldn’t go wrong!

wish it was read by Stephen Colbert, but very entertaining and interesting. I'm a fan regardless.

A much better narrator would have been nice

A much better narrator, for the bio of a comedian. would have been nice. An ok narration, but far too “documentary”. The story is wonderful, learning so much about the history behind the Man, someone honorably mentioned by Michelle Obama, in her book Becoming, for his tireless work for charity.
Love Stephen!

He has Risen Above his Tragedies

Plagued by family tragedy at an early age- he made lemons into lemonade
The despotic 45th -soon to be dethroned- President has brought him into his own
Godspeed Colbert!

Truthiness revealed and so much more

This was fun! I thoroughly enjoyed this book. As it chronicles the path of its subject, I find myself returning to a simpler time and chuckling along the journey.