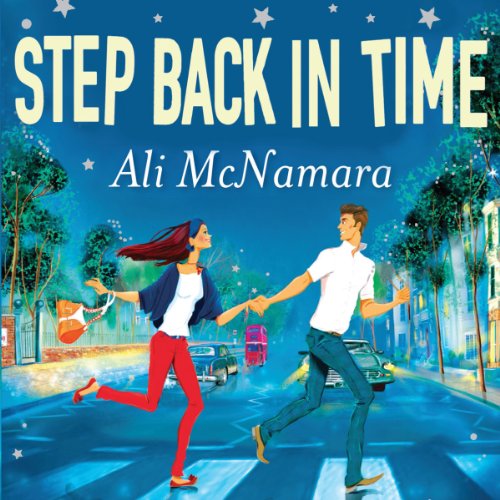 Step Back in Time

Step Back in Time

How many lifetimes would you travel to find a love that lasts for ever? When single career girl Jo-Jo steps onto a zebra crossing and gets hit by a car, she awakes to find herself in 1963. The fashion, the music, her job, even her romantic life: everything is different. And then it happens three more times, and Jo-Jo finds herself living a completely new life in the 1970s, 80s and 90s. The only people she can rely on are Harry and Ellie, two companions from 2013, and George, the owner of a second-hand record store.

If she's ever to return from her travels, Jo-Jo must work out why she's jumping through time like this. And if she does make it back, will her old life ever be the same again? Step back in time with this fabulously fun and feed-good comedy of time travel and romance, from the author of From Notting Hill with Love... Actually

What listeners say about Step Back in Time

loved it much more then i thought i would,I just couldnt stop listening to it.

Cute, but definitely not a page turner.

Given the previous reviews I was a little disappointed, but really it is just what was written on the box. A totally unbelievable plot line with almost no intrigue and a rather lame Beatles theme that doesn't offer much to anyone who is not a real fan, nevertheless it was entertaining if you just want something light and easy. Narrator did a good job in bringing the characters to life.

This book was unusual as it dealt with traveling through time on a voyage of self discovery. It went through many decades. I thoroughly enjoyed it although I at first was concerned about how the author would handle it. She did a fabulous job!

A flat finish to a fun book

What an incredible master weaving of characters, plot line and story development. To say nothing that it was based entirely upon the greatest musical four some of all time. This is hands-down one of the most delightful, intriguing and well-crafted stories I've read in a very, very long time.

This author has an astounding skill to pick up all the threads that she created over a span of time and bring everyone of them back together. I listened to this while on a very long car trip, And was so intrigued and absorbed that before I knew it nearly 9 hours had flown by!

Thank you for the story!!

Like I already experianced with Aly McNamara's books, the second part is always the better.
With an interesting premise, the first half of the book become a little boring and I wasn't seeing where is was going with those confusing and illogical junps in the timeline. There seemed to be no rule or sense to the time travelling and I started to fear it was all about the Beatles references, and I wasn't enthusiastic. But then around the half or a bit earlier I started to understand and enjoy the story, and the end was sweet and satisfying although not particularly original. If you love beatles and I quick sweet read that's ok, and I was even a little bit moved one time around the end..

If you love the Beatles...you will love this book

Take a step back in time...again and again! Jo Jo is living her life on Fast Forward when she is given a chance to go back in time and not on her own accord. She learns some life lessons along the way. Great story and well done by Katie Scarfe! I have read several of Ali McNamara's books and this one I have read a few times over.

Where does Step Back in Time rank among all the audiobooks you’ve listened to so far?

I have a very eclectic reading range, but ranked amongst all the other chick lit books, I'd say it's a very solid read. It's one of the longest chick lit books I've listened to with 11+ hrs but I listened to it all in one sitting. Not necessarily something I'd recommend doing since I was exhausted by bed-time, but it's one of those books you won't mind continuously listening to, or pausing to come back to, since the story is engaging enough.

What other book might you compare Step Back in Time to and why?

The closest other I can think of is Sophie Kinsella - 'Remember Me'. More for the heroine being thrown into the deep end, not knowing what's going on, and having to work out who she is and what her life is about. In 'Step Back In Time' it's time travel vs. memory loss, which makes it a harder sell, but it's handled well enough that it's not hard to suspend your belief and take the journey with Jo-Jo.

I really enjoyed her performance. There are distinguishable voices for each character and she kept her narration light, to go with the tone of the novel. There were no annoying habits or weird inflections to throw me out of the story. I had no problems whatsoever, listening for hours.

If you could rename Step Back in Time, what would you call it?

If pushed, I would say something that is obvious, yet subtle, Beatles themed. Something like 'That Road Before' (from The Beatles - 'The Long and Winding Road'). But really, I think the current title did all right.

As you might have realized, there's a very strong Beatles theme to this book. I think if you're a solid Beatles fan, you'll love picking up all the clues and hidden gems related to the Beatles that are thrown out. You might even want to make a game of it, and see how many you get right. As a regular fan of the Beatles it's a good read, where you'll get some clues but won't feel overwhelmed, and may even laugh when you realize you missed some obvious ones. That being said, this book is about love and friendship. I particularly liked the long and winding road that Jo-Jo takes to finding herself, falling in love, and discovering friendships across the universe, in the sea of time, and in [her] life (okay I'll stop!). Each time she wakes up is an entire story unto itself. You'll forget that you still have hours more to listen to. And once she's down again, you'll be intrigued to know what happens this time. So, a very intriguing story that keeps moving forward. I recommend listening!

Would you consider the audio edition of Step Back in Time to be better than the print version?

The idea of going back in time was fun and intriguing

There are no scenes I like particularly over another they just follow each other smoothly, although was less keen on the 80's

This is the first book of Aly McNamara I read but will not be the last one. I really like her style. It is a real "page turner". Probably one of my fav in this genre. I even listen to it twice. Once for the story and once to find back all the hints about the Beatles. A must listen story.

Yes - Can relate to the decades

What was one of the most memorable moments of Step Back in Time?

Which character – as performed by Katie Scarfe – was your favourite?

I listen whilst driving so never listen in one sitting

i loved this book, beautifull and clever writing, that took me through the decades.

I loved this book. l have listened twice now to it on Audible. It is very clever and keeps you enthralled until the end.

this is the first story I have listened to by this author and I enjoyed it.
the link through the decades are the songs of the pop group the beatles and jo-jo's memories of the things she misses from 2013.
after the end of the story is the links to all things beatle related and I didn't know some of them.
a wander down memory lane if you have lived through the decades.
Katie scarfe did a good job performing the book.

Step Back In Time by Ali McNamara

George was my favorite character because you always knew he knew more than he was letting on, but wanted the main character Jo Jo to experience things for herself.

Can't wait for the next Ali McNamara novel.

Usually I love Ali McNamara books so I was really looking forward to relaxing with this…however this latest offering left me very disappointed. The storyline is a good idea in theory but I found it disjointed especially as I know the main location setting very well. Had to listen to it twice to see if It got better on the2nd listen…I won’t be giving it another listen - which is rare for my audio book collection.