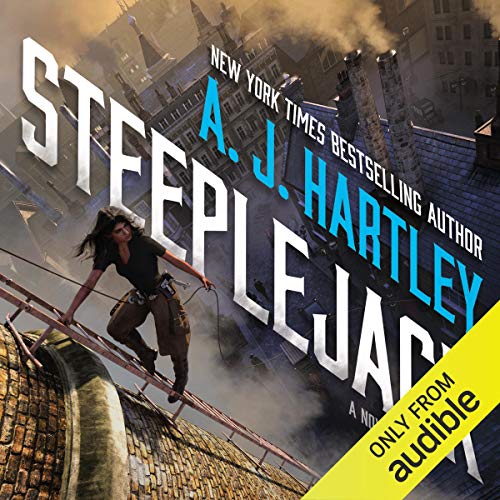 By: A. J. Hartley
Narrated by: Noma Dumezweni

Seventeen-year-old Anglet Sutonga lives and works as a steeplejack in Bar-Selehm, a sprawling city known for its great towers, spires, and smokestacks - and even greater social disparities across race and class.

Ang's world is turned upside down when her new apprentice, Berrit, is murdered the same night that the city's landmark jewel is stolen. Her search for answers behind his death exposes unrest in the streets and powerful enemies. But she also finds help from unexpected friends: a kindhearted savannah herder, a politician's haughty sister, and a savvy newspaper girl.

As troubles mount in Bar-Selehm, Ang must discover the truth behind both murder and theft soon - or else watch the city descend into chaos.

What listeners say about Steeplejack

Nice alternative take on the genre.

Really liked the African urban cross cultural setting . A fresh alternative to the usual London / New York backdrops . Also had a wonderfully fresh quasi steampunk feel to it. Started slowly but soon got into its stride of layered social and political intrigue and some great action sequences, not for those with literary vertigo. Anglet’s investigation into her fellow steeplejack apprentices’ murder takes her deeper , or higher as the case may be, into a convoluted series a mysteries and journey of self discovery. Very well narrated by Nona Dumezweni. Overall 4.5